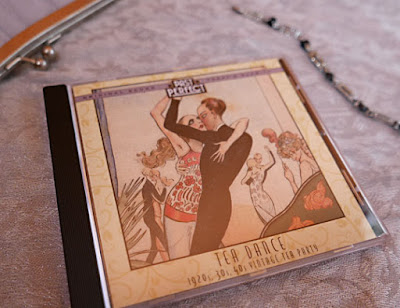 My route into vintage was via the 1920s, and a love of silent films and the music of the era. I've dipped more into later decades in recent years, but recently felt the need for more jazz-age stuff on my iPod*. It has been literally years since I got some new-to-me music from that era. I used to be able to buy CDs from Duck, Son and Pinker, a shop in Bath that had the best selection of vintage music, and bought a lot of CDs back when I was able to browse their stacks, but since that closed down options have been limited. I'd got a couple of CDs on the Past Perfect label from Past Times when that was still going, so decided to order some more discs straight from Past Perfect.


The CDs arrived the day after I ordered them. I can't fault Past Perfect's service, and as I got Tea Dance and Tea Dance 2 as a bundle it was cheaper than Amazon even with shipping.

All the tracks are taken from original vintage records, with the annoying scratches and pops acquired over decades of use removed. They're from the 1920s to 1940s, though I felt the disc definitely leans towards the earlier side of things.

Tea Dance is exactly what you'd expect: music suitable for a tea dance. In case you've never come across those, they are literally what they sound like, dancing with afternoon tea on the side. So, much more sedate than cocktail-fuelled 1920s parties or 1940s swing nights. Nowadays they seem to be held for older people, though why pensioners should have all the fun is beyond me... I'd drop in to the monthly tea dance in Trowbridge Town Hall if only I weren't at work.

One thing I liked about the music on this one is that many of the songs are tea- or baking-themed (though it's worth noting that 'tea' was also Jazz Age slang for marijuana, and I suspect the line in Texas Tea Party, 'Mama where did you hide my tea?' isn't a polite enquiry as to where mother has stashed the Earl Grey). There are some non-tea themed ones, too. My favourite tracks include the Boswell Sisters/Dorsey Brothers' version of When I Take My Sugar To Tea, The Mills Brothers' Sweeter Than Sugar, and Fred Astaire doing Let's Face The Music And Dance. Top of my list, though, is the last one on the disc, A Nice Cup of Tea by Sam Costa and Peter Yorke and his Orchestra. It's both silly and civilised, and sums up exactly how I feel about my favourite drink.

If you like 1920s and 1930s music, I definitely recommend this compilation. You don't need to dance to enjoy it. It's cheery without being frenetic, and full of the spirit of the Jazz Age away from the frenzied partyings of Bright Young Things. It's my cup of tea.

*Yes, I still use an iPod. It saves me filling my phone up with music, and is extremely useful when I need to get my head down at work and block out other stuff going on in the office. Plus it keeps me going through my morning walk.
Labels: 1920s 1930s 1940s Music