For once, I actually feel as though my life is vaguely under control. That's pretty rare for me. The garden isn't quite a mess, the house is more or less presentable, and I've had time to work on one or two personal projects. I've really been enjoying vintage gubbins lately, too.


I bought some more vintage music. You can see my review of the first CD, Tea Dance, here.

I'm also on a mission to eat more salads. My back has been playing up, and I suspect the cause is a disc problem - I also get a numb thigh, which would suggest a nerve is being compressed somewhere - but as I know the doctor's first response will be to tell me to lose weight, I might as well do all the appropriate things before going to see the doc. I've decided to write about my salads over on Greedybots, and kicked off with a retro classic, Russian salad. It's laden with mayonnaise, so probably not great on the calorie front. Tasted great, mind you. I shall try some other retro salads too, though I'm not sure whether to go the whole hog and do a jelly salad. What do you reckon?

More of my vintage has made it out of the wardrobe, probably as a result of last weekend's mothproofing escapades. I worry about damaging clothes, especially in the case of frocks that have had buttons pulled off in the past, but that's stupid. If it doesn't get worn, it's pointless. So, if it fits, it gets worn. Not sure what the workmates make of my outfits, though my favourite 60s wiggle dress got plenty of compliments on Friday.

I had a book-buying accident in Waterstones yesterday and got a couple more books in the British Library's vintage crime re-release series. Oops. Still, I only bought two books and there were at least five I wanted, so that's sort of a win. I've started reviewing books for another magazine (I do three now, SFX, Crime Scene and this new one, which is a launch that I'll tell you more about when it goes on sale), so I don't know when I'll get round to reading the new ones.

Glamorous July is going well - I don't manage to do every day's challenge, but I did dig out my AB crystal necklace for the 'sparkle' challenge. (I need more of these!) 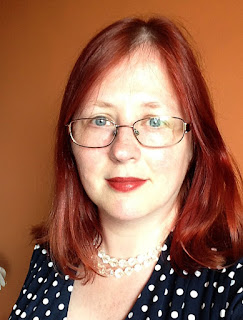 I'm not watching much telly at the moment, but one thing I really do love is The Living And The Dead. It's set in 19th-century Somerset, as a young psychologist and his second wife move back to his family estate and try to make a success of the farm, though all sorts of spooky goings-on get in the way as the dead seem to have an effect on the living and the psychologist starts to think it's more than memories causing the troubles. It's like Poldark crossed with The Wicker Man, and I think it's brilliant. I just wish the BBC had waited till later in the year to broadcast it, as so much of it is to do with the farming cycle, harvest time would have been a much better time to watch it. If you've missed it, it's available on iPlayer from the start still.