The Pan Books of Horror - GIVEAWAY! 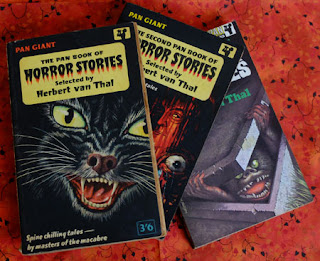 When I was a teenager (in the 1980s-1990s), battered old copies of the Pan Books of Horror Stories were everywhere. Secondhand bookshops had loads, as did just about every jumble sale or car boot stall. Anywhere that sold secondhand books, it seemed, would have one of the volumes.


Mr Robot collected a whole heap of them. He was tempted to get rid of them a couple of years back, but I used my spousal veto and I’m very glad I did; I have a strange affection for them. Perhaps it’s nostalgia, perhaps it’s the fact that books of good short horror stories aren’t frequently published nowadays, but I am very pleased we still have them. Christopher Fowler did a post recently on ghost stories not being like horror stories, and it's true that I wouldn't read horror stories specifically at Christmastime whereas a ghost story is traditional then, so I'd agree that there is a difference, but I still reckon a good horror story is good at any time of year. (Incidentally, where did that custom come from - Dickens? Or did A Christmas Carol stem from an already-existing tradition of ghost stories at Christmas? I ought to know this. Arfon, if you're reading this, do you know?)

Anyhow, to return to the Pan books. It’s not surprising that there were so many books kicking around in the late 1980s and early 1990s, as the series ran to 30 books between 1959 and 1989 and was extremely popular. The early volumes were very good, with short stories from well-respected writers such as Bram Stoker, Nigel Kneale, Harry Harrison, Tanith Lee, Patricia Highsmith and even Agatha Christie (volume 2, Christie fans - the story is 'The Last Seance'). Later, however, as horror literature itself changed in the 1970s and 1980s, becoming less suspenseful and more shockingly gory, the stories became rather weaker, and the series petered out. I like the earlier ones much more than the later ones. You could say the books had a lot in common with British horror generally, and Hammer's output specifically.

Nowadays people seem to be rediscovering the appeal of these little books, to the point where they are actively collecting them. There certainly seem to be fewer around - perhaps many got recycled, as they were so common at one point. I can't remember the last time I spotted one in a charity shop. If you find one, treat yourself. It could be the cheapest scare you get all year. Also, a book was relatively recently printed in honour of the originals, called Back From the Dead: The Legacy of the Pan Book of Horror Stories. It contains reprints of some classic stories, plus new ones, and was put together with real love and care.

In an almost spooky coincidence, when I was getting a few books to photograph for this post, it turned out that we had two copies of the second book, the one with that Agatha Christie story in, so I thought I'd do a giveaway. If you fancy a mid-1960s scare, just leave a comment below, and on Tuesday morning I'll fire up the good old random number generator and someone will win it, and hopefully the postman will deliver them in time for the 31st. I'll throw in a few goodies, unless you have allergies/intolerances that mean you can't have them - let me know if you're veggie/gluten intolerant/simply an oddball who doesn't like sweets in your comment.