A trip to Guerlain

As a perfume lover, when I went to Paris recently the flagship shops of some of my favourite perfume manufacturers were high on my list of places to visit. Most of my favourite fragrances are made by firms which specialise in scents and beauty products; while when the likes of Coco Chanel and Christian Dior ran their businesses they seemed to release scents that were the olfactory equivalent of their dresses – stylish, impeccably made, desirable – nowadays the perfumes seem horribly mass-market, designed to give people into the idea of the brand a way to wear it even if the cost of a top would be out of their reach. As such, what's in the bottle doesn't matter as much as what label's on the outside.

One of the places that was on my list was Caron. One of the really old perfume houses, it's never really shouted about itself (too aristocratic for that). Many of Caron's fragrances are still sold as 'urn scents', so you go to the retailer - that's Fortnum and Mason here in the UK - buy a bottle, and it's filled with perfume from a huge crystal urn by an assistant. Needless to say, it's not something you'll find on every high street, and even the scents that are sold ready-bottled aren't widely available. (I buy most of mine from Les Senteurs, though AllBeauty recently had some Carons at discount prices so I stocked up. If there's a perfume you like, I recommend checking AllBeauty to see if you can get it for less.) Anyway, we tried twice to go to the Musée d'Orsay. The first day it was closed because of a strike, so we went back the day after and it was still closed because of a strike, so we decided to bimble up to Caron instead as I'd put the address in my phone. And the shop was gone! There was a sign on it saying they were reopening around the corner, so we went to that location and it wasn't complete yet. Bah.
At least you can rely on Guerlain. Decades ago there was a saying in France that Caron was for duchesses and Guerlain for the cocotte. Well, all hail the kept woman because at least she's always ready to do business, and their shop on the Champs-Elysées was open and glittering. We didn't go to Guerlain simply for perfume, though. For our anniversary dinner, we ate in their little restaurant, downstairs from the main boutique.
We started by looking around the shop. Mr Robot had told me he'd buy me a bottle of something. My very favourite perfume, the sublime Mitsouko (one which frequently tops perfume aficionados' lists of the greatest fragrances) is from them, and they still produce some of their classic scents. However, over the decades laws on allergens have restricted what can go into perfumes. You might just be able to make out in the photo above a line of perfume bottles on an upper shelf, and a line of white domes on a lower shelf. The domes are scented, one with the current version of the scent and one with the original. Years ago I used to wear L'Heure Bleu a lot. Created just before the First World War, as Mitsouko was created just after, the two scents are said to sum up the spirits of their ages, one wistful and dreamy, one challenging and complex. Sadly, time has not been good to L'Heure Bleu, and I don't think being able to smell it in all its original glory did the modern version any good. I'm treasuring the small amount of the old stuff I have left! Still, it's fantastic that Guerlain does this and gives you the chance to experience the changes for yourself - albeit not on skin.

In the end I didn't get any perfume at all in Guerlain. As well as Mitsouko I've got L'Heure Bleu and Shalimar at home, so I've got three of the greats already. The other scents on display were all lovely, but didn't really make my heart sing, and nice-but-not-amazing isn't really good enough to get a space on my crowded perfume shelf. I'd hoped they might have some of the company's classics stashed away, but alas! It was not the case.

So, we went down to the restaurant... 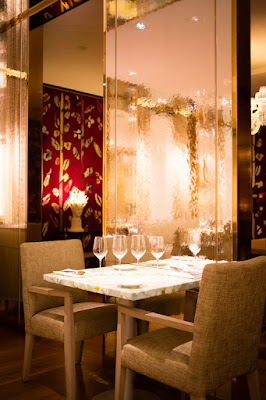 The restaurant is a petite, heavily gilded space downstairs from the shop. Lots of gold mirrors and tables decorated with pictures of flowers used in perfume stop it from feeling like a dingy basement. The food, of course, is the exciting bit: the menu has been devised to include ingredients with an aromatic quality. What we got was rather different from what we'd seen on the restaurant's website. Instead of being a la carte it was a fixed-price menu, and a lot of the dishes were more substantial than we'd expected, but as the price was lower than we'd anticipated and the meal more filling, that was a world of win, really. My standout dish was lamb spiced with cumin - I'd expected something curry-like, but somehow it wasn't, it was sharper and less heavily spiced than a curry - while Mr Robot's favourite was a dessert called La Petite Robe Noire (the little black dress), named after one of Guerlain's most recent perfumes. The berries and cherry of the perfume translate easily into pudding form! And the bergamot marshmallows they gave us with our after-dinner tea were beautiful. It's traditional to have coffee after a meal, I know, but Guerlain makes teas based on a few scents, so we simply had to try a couple of those.

I'd recommend the restaurant if you're in Paris and want to eat somewhere fancy early in the evening (the shop closes at 8). If you don't have wine, or take the by-the-glass option (we guzzled a bottle, of course), it's actually really affordable for somewhere so posh, being 50 Euros a head for three courses, preceeded by canapes and with those sweeties afterwards.

Oh, and Goody? I did this just for you, so you could be there in spirit!