The desire to hibernate 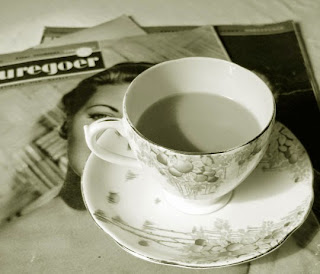 I don't know if it's the weather, or the nights drawing in, but I'm feeling rather less outgoing than usual right now – I just want to hide at home and cook and make things. Having had sore ears hasn't helped. I've definitely not been in the mood to go places or do anything exciting (ie bloggable). Unfortunately by the time I've got in from work and have done all the things that have to be done any enthusiasm for intricate projects has drained away and all I'm really good for is watching telly*. At least when you're a knitter telly time can still be productive.

After ponking around making Halloween cards last weekend, I thought I should talk about how my latest knit is progressing, because that's rather more important. I don't want to show you photos as I'm making it for a fellow blogger and it's only fair that she should get to show it to you first, but it is coming along beautifully. It's not a vintage pattern, but it's a fair isle tank top so could easily pass for one.

I don't often knit for other people as I'm very slow, though this is in DK wool (twice as thick as I usually use) and doesn't have sleeves, so it should come together much more quickly than my usual projects. The yarn is a Debbie Bliss one, and it's a pure wool with that slight 'stickiness' (really a matter of friction) that makes it ideal for colourwork. It's thicker than would have been commonly used before the late 1950s, but has the perfect drape and handle, and all in all it feels right. Most mass-produced repro knitwear nowadays is done in synthetic fibres in too fine a gauge – it never looks accurate, to my eyes. Synthetics drape differently and take colours differently to wool, they're somehow cooler and brighter, probably because the base fibre is pure white whereas natural fibres are usually cream at their palest. If you look at vintage knitting magazines, you really do notice a shift in the colours used when the 1960s really kick in, there's a vibrancy (or possibly garishness!) that synthetic fibres bring that wasn't there before.

I'm still yo-yoing about my following project. I'm planning to make myself something but really can't make up my mind. One minute I plan to knit something 60s because so much of my wardrobe is 60s, and another I remember that a lot of 60s patterns are deathly dull and none of my separates are very 60s anyhow. It's going to be pale grey and in 4ply because I have ten balls of grey 4ply, but beyond that I have no idea what it'll be. My current favourite potential pattern is 'It Cannot Fail To Please' from A Stitch in Time volume 1, but by the time I cast on that idea might very well be failing to please and I may have changed my mind again.

While I may not know what I want to knit, I do know what I want to wear it with: a straight, calf-length pink and grey tartan skirt. It came from a charity shop (looking back at my blog, that was back in 2010) and has been one of the backbone pieces of my wardrobe each winter since. It can look 1910s-30s or 1950s depending on the styling. The things I usually wear with it are getting very worn out, and while I'm going to have a go at repairing them, the skirt really does need new friends.
In case you're wondering how the urchins are getting on, owing to their talent for Making Stinks and their habit of hiding away, Ziggy and Pippin are not allowed in the bedroom where most of my wool is kept. Once they get under the bed they're invisible. They need socialisation, so, no time in the bedroom and no access to wool for them. The socialisation is starting to pay off; I was ill off work yesterday with my ears, and Ziggy actually allowed me to stroke him. He's such a timid creature, bless him, though he always has epic resting bitchface in photos. There is nothing they won't play with. We're planning a Christmas tree covered in unbreakable baubles this year – my precious family glass ones will NOT be coming out! – and on top of the aforementioned repairs, I'm hoping to get round to recycling some other old clothes that are too knackered for the charity shop into decorations and (probably) cat toys. I can do that in front of the telly, right?


*On which note, Jekyll and Hyde starts on ITV on the 25th of October, while for its Unmade Movies series BBC Radio 4 is broadcasting a dramatisation of Orson Welles' screenplay for Heart of Darkness at 2:30pm on the 24th, and a dramatisation of Alfred Hitchcock and Ernest Lehman's screenplay The Blind Man (completed by Mark Gatiss) at 2:30 on the 31st.
Labels: knitting