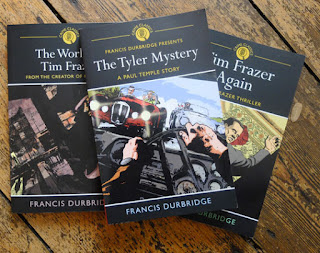 It's funny where you find things. We've got a couple of bookshops in Trow, Waterstones and then Super Book, a place that sells cheap books. Usually their stock is stuff that's been on sale for full price elsewhere, but I've honestly never seen Arcturus Crime Classics on sale anywhere. The bookshop was selling them at two for a fiver, which makes them less than half the price of the British Library classic crime reprints. What really attracted me was that three of them are by Francis Durbridge, creator of Paul Temple!

In case you've missed me waffling on about it in the past, Francis Durbridge's amateur detective hero, crime writer Paul Temple, and his journalist wife Steve, first hit the radio in 1938 and were on air on and off until 1968. There have been films made (I've reviewed Send For Paul Temple, Calling Paul Temple and Paul Temple Returns/Bombay Waterfront), and a television series. I can't help wondering why no-one has brought Paul and Steve to the television again, as there's a huge archive of stories to draw on.

The Tyler Mystery is absolutely typical of the Paul Temple stories. At the start, Paul and Steve have moved into their new house on Eaton Square, and are trying to pick out decor for it. One of Paul's books could be made into a film, and Steve is excited at the possibility of going to Paris to meet the producer. At the same time, Betty Tyler, a pretty young hairdresser is found strangled and hidden in the boot of a car near Oxford, and the only clue is that she's connected with a criminal Paul had helped put away in the past. Along with the police – Sir Graham Forbes and Inspector Vosper both appear – Paul and Steve start digging, and that trip to Paris goes out the window. Throw in the usual fast cars, Steve going missing, plenty of cocktails and well-bred people doing not very well-mannered things and you've got your story. It's exactly the sort of thing you'd hear on the radio only in novel form, though I don't believe this one was ever dramatised for broadcast. The BBC has since released a CD set of Anthony Head reading it.

I was really struck by the descriptions which, of course, you don't get on the radio. I daresay when the programmes were broadcast listeners would have had a very good idea what things might look like, but nowadays we don't. The Temples' flat, for example: I'd always imagined it to be very modern, but Durbridge describes it as furnished with antiques, but with modern art on the walls. I never really took the look of the films as definitive as there's no way of telling with those how well they match Durbridge's own ideas, but in the novel we discover exactly how Durbridge saw the couple. The car is usually referred to as 'the Frazer Nash'; I had no idea what one of those looked like, but a quick Google image search showed Frazer Nashes were very swanky sports cars.

And from a Frazer Nash to Tim Frazer. A Tim Frazer series was on television before the books were released (The World of Tim Frazer was originally published in 1962, and Tim Frazer Again in 1964). They are bizarre for one reason: they are cosy espionage novels. Cosy crime novels are, when you think about it, a bit odd, but they do have a domestic setting, which would account for the warmth. Tim lives in a nice mews flat, and while the first story opens with him chasing after an errant business partner who's leached £5,000 out of the business, causing it to go bankrupt, you never really feel Tim's in much danger or suffers much hardship. Irritatingly, he doesn't seem to care much for all the poor people who worked for him and have lost their jobs either. (Maybe that's to do with the era; my mum always makes it sound as though it was dead easy to get jobs back then.) Tim's single, so there's invariably a pretty girl or two around, but he's a gentleman so there are no shenanigans (the sixties weren't swinging for Mr Frazer), and there's none of the wit that works so well between Steve and Paul Temple. Weirdly, they reminded me of Buchan's Richard Hannay novels more than anything else, written decades earlier.

I had a jolly good time reading all these novels. They're not exactly complex or deep, but they are good comfort reads on long evenings or dreary days. And what do you expect for less than the price of a pint?!
Labels: 1950s 1960s books crime spy