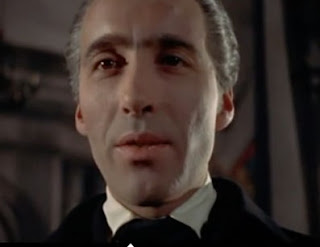 Every October I salute a Vintage Hottie of Horror – lady or gent doesn't matter, all that counts is that they are creeptacular retro-crumpet – and this year there can only be one candidate: Christopher Lee.


Most actors, like most poets, are generally at their best in their youth, when they are young and hungry. Christopher Lee was that rare thing, a star who never lost his edge. Maybe it's because he wasn't exactly lauded as a young actor; seen as too exotic for most mainstream roles, that deep, resonant voice, towering height and aquiline face only really became appreciated once he started acting in monster movies. Indeed, it could be said that he and 2014's Bloofer Gent, Peter Cushing, were the stars that made Hammer.

He made some extremely fine and critically acclaimed films, but it's the 'geeky' ones he made that will, I think, be the most loved and best-remembered. He acted in some classic series – Bond, Lord of the Rings, Star Wars – and any one of those would guarantee him an enduring memory, but above all there is Dracula. Had he never done anything else he would be remembered for being one of the great icons of vampire cinema, in my view second only in status to Bela Lugosi. It's easy to overlook the impact Hammer had on horror films in general. In Hollywood, by the 1950s horror films had become jokes, with movie monsters mainly serving as props for the likes of Abbott and Costello. Hammer brought full colour – full scarlet blood colour – and unbridled passion to the genre, making what eroticism had previously only been hinted at much, much more visible. As head monster, Lee was crucial to that blood/lust combination. 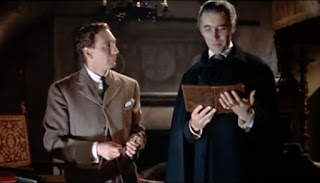 For delivering as much phwoar as fear, for staying classy even when performing the most ridiculous roles, and for never dwindling to the naff irrelevance of being declared a 'national treasure', suave and scary Bloofer Gent, we salute you!