Are you a winner? 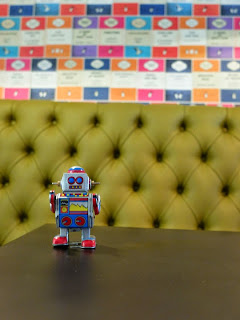 If you're Paul Starkey, then congrats, you are! You've won a vintage copy of The Second Pan Book of Horror Stories, plus some other bits and bobs. (Frankly, you're lucky the gingerbread mummies are making it into the parcel, as I was tempted to eat those myself.)

I posted some Halloween cards off to relatives on Saturday, but still need to make my Halloween cake for work. I'm planning on making a mummy-head carrot cake this year, and bought a special nozzle so I could pipe the cream cheese icing into 'bandages'. I hope it works!

Today is the second day of Thadingyut, which Mr Robot and I mark.


It's a Burmese Buddhist festival, the festival of lights, and a time when people honour their elders and teachers. I'm not a Buddhist, and while I believe I have some Burmese ancestry it's very distant (1/16 at most), but we were in Maymyo/Pyin Oo Lwin, my granddad's home town, at Thadingyut a couple of years ago, and it left a lasting impression on us. I do sometimes wonder how much cultural stuff my granddad gave up when he moved to Britain, and how much of that was voluntary. Before he died he'd spend ages looking at a book of pictures of Burma my dad got him; I think he missed it. Eating Burmese food and lighting a candle is a good way to reconnect with what might otherwise be lost – and if you can't remember long-gone family members in the run-up to All Soul's Day, when can you?

Anyway, that's the heavy bit. What it boils down to is: Mr Robot made Mandalay hand-mixed noodles last night, recipe from Mi Mi Aye's book Noodle! Mi Mi is an all-round awesome person and has really helped us when it comes to cooking Burmese food and learning a bit about Burmese culture. These noodles were the most Burmese-tasting thing we've eaten in ages. You pile the noodles into a bowl, then put on some of the chickeny sauce, then add all the other bits and bobs, toss it all together and enjoy. I put in lots of fish sauce. I hated fish sauce when I first tried it, then I grew intrigued by it, and now I'm addicted. Tonight we're having glossy black pork, oxtail curry, rice and a couple of salads. There will be plenty of fish sauce in the salad dressing.