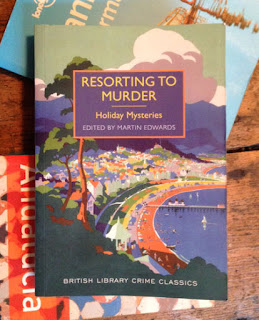 I am not a cheery Mim today, as yesterday I had some pretty heavy-duty dental work done. Short version: after 17 years of problems relating to two root canal fillings, I paid a private endodontist - root canal specialist - to redrill and clean out both those root canals. It's complicated by an operation that's left some amalagam filling in my jawbone. I shouldn't grumble too hard as most dentists would've wanted to pull both teeth, whereas my endodontist has definitely saved one, and we're going to see how the one with the bone filling below it does. He did a really good job. Anyhow, today it's all a bit sore (I can't even cope with soup with chunks in) so I'm cheering myself up with a bit of reading.

Resorting to Murder is another in the British Library Crime Classics series. I enjoy short stories, so thought this collection could be a real winner, but something about it left me flat. There are fourteen stories in the book, including some by some very famous writers, but many of them didn't really grip me. None of them were bad, but none of them were really exciting. ('The Adventure of the Devil's Foot' is not Sherlock Holmes' finest moment.) I have some collections of pulp stories from magazines like Black Mask, and they're great, so I reckon the problem with these stories is that they're very British, and that polite dance of manners and personalities that's so enjoyable in Golden Age British crime fiction needs more space than a short story allows. When you lose those subtle interactions and layered hints at possible motives, you're left with something fairly bland.

'The Hazel Ice' by HC Bailey was my favourite story, and pretty good. In it, an English surgeon on holiday in Switzerland takes an interest in the case of a scientist killed in a rock fall. It's got all the classic Golden Age elements - rich people, a pretty girl, a couple of possible suspects - in a tidy package, feeling in essence like a cut-down Agatha Christie. I'm afraid GK Chesterton's 'The Finger of Stone' was my least favourite because of its truly dreadful science! 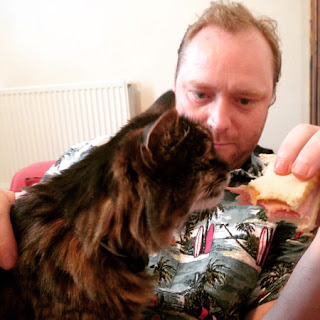 And I leave you with Boycie helping herself to Mr Robot's ham sandwich. It's got English mustard on, which I would have though was far too spicy for cats, but she ate it bread, ham, mustard and all. Crazy little animal!
Labels: books crime