I like taking photos with my phone. I have a lovely little camera, a Fuji X20, but I don't carry it everywhere and my phone gets used for random snaps. I like sharing images on Instagram, too, which drives me to take lots of photos with my phone. Since I started doing regular morning walks before work, taking photos has helped make things more enjoyable. I have a couple of main routes, and looking out for new, interesting, fun or just plain pictureque things to take pictures of en route definitely stops it getting boring. (In case you're wondering, my weight is pretty much unchanged, but I do find a walk lifts my mood immensely, so I'll stick with it.) 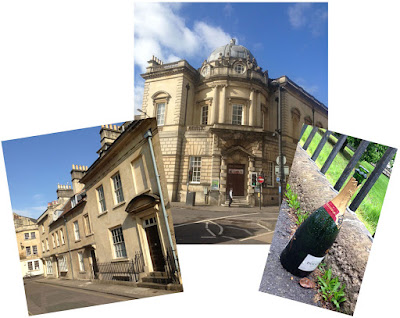 I do count myself lucky to have such an attractive 'gym' for my morning exercise. Here's a couple of this month's sights: an attractive row of houses round the back of the theatre (I think they film things here fairly regularly), the Victoria Art Gallery, and evidence of the sort of street drinking you get in somewhere like Bath. 'We are all in the gutter', Oscar Wilde might have said, 'But some of us are in the gutter outside the Royal Crescent with a bottle of Bolly.' 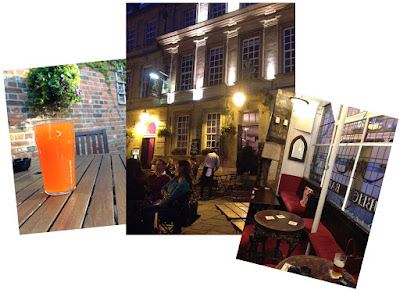 Being relatively civilised, I prefer to do my drinking in the pub. Most of my pub drinking is in Trowbridge, but for some reason the only one I have from Trow is a pint of cider. YES this is cider. The still, bright orange, incredibly alcoholic sort that's traditional down here in the West Country. You can keep your fizzy ciders – especially the ones with fruit flavours, appalling muck – because I'm going to stick to the real thing. The Bath pubs are (L-R) The Garrick's Head, which is attached to the theatre, and has a lovely seating area outside and occasionally Palmer's beer on tap, and The Coeur de Lion, which may or may not be the smallest pub in Bath. It certainly has the smallest bar area, but it also has an upstairs, so there are those who claim the Volunteer Rifleman is the smallest as it has a larger bar but no additional floors. Either way, I'd only advise holding an office party in either if you're self-employed! 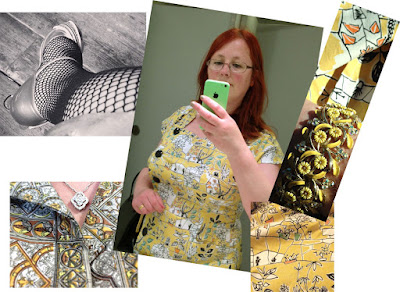 I wore clothes! Shocking! Although some of these clothes were at burlesque class and so 'wearing' is possibly the wrong word for it. Every time I wear my Doghouse Vintage 'Potty Lotty' dress it cheers me up and I take loads of photos. I was also really pleased with how the shape of the pendant Papa Robot sent me for my birthday echoes the pattern on my Mode O' Day dress. 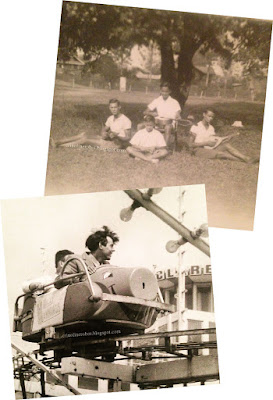 On the subject of family, a long-lost relative also found me this month, the daughter of my granddad's brother Bobby. I shared a few photos with her, including this one, one of my favourites. It was taken in Maymyo in Burma (now Pyin Oo Lwin in Myanmar) in the mid-30s, and I'm pretty sure it's my granddad and his brothers – Granddad Fred on the left, Bobby on the right, Patrick at the back and Bunny at the front. I was intrigued to learn that during the war Bobby had been in the Royal Army Medical Corps on the pathology side of things like granddad, and that he'd boxed welterweight. Granddad was heavyweight and Bunny lightweight. I need to find out more about Patrick now...

As for Papa Robot, here's a shot of him on a rollercoaster in the 1960s that I tweeted on Father's Day. Hehehe. It's one of my favourites of him.

Did you have a fun June?
Labels: robot data