Birmingham with a toy robot 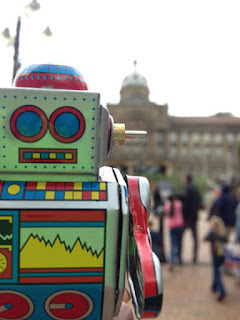 Every blogger looks at the search terms people use to find their blog. As I've covered both Chrystabel Leighton-Porter (the model for risque wartime cartoon strip 'Jane') and the astonishingly buxom Sabrina (no surname needed, back in the 1950s) in my 'Forgotten Bombshells' pieces, I get a fair few people looking for them, usually either their measurements or in the nude. Oh, internet*. However, a while back someone searching for 'Nice places to go with a toy robot' found my blog. Were they looking for nice places to go that already had a toy robot for them to meet, or nice places where their toy robot would be welcome? Sadly, I had no way of knowing.


Never let it be said that Crinoline Robot is a blog that doesn't deliver! I bought a toy robot, and took my metal retro-chum (and my husband, Mr Robot) to Birmingham this Tuesday and Wednesday. England's second-largest city, Birmingham is renowned for its friendliness, so when a terrorism 'expert' on Fox News in the US claimed earlier this year that the city was a no-go area for non-Muslims, it caused a lot of hilarity. This was the first time I'd been anywhere in Brum that isn't either Edgbaston or the NEC, so I wasn't sure if it would be nice, but I had pretty high hopes.

I didn't do much vintage shopping, as we just wanted to wander and see what we could find. Going to a new place with a list of shops and attractions to visit takes away some of the joy of exploration, I find. I was really impressed with Birmingham from the moment we left the station. I love Victorian buildings, and the city has some super ones. In fact, I liked a lot of the buildings I saw; Birmingham had the confidence to build big without losing the sense that the city was a place for people, and as well as some great Victorian structures there were also attractive large ones from the 1920s and 1930s with beautiful deco touches. 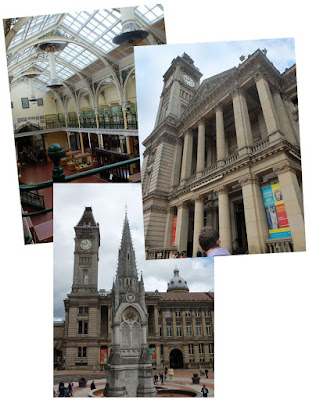 One place I was dead keen to go was the municipal Art Gallery and Museum, as they've got the finest collection of Pre-Raphaelite works anywhere. There weren't masses on display, but there were some very famous ones (The Blind Girl, The Pretty Baa-Lambs, the cartoon for King Cophetua and the Beggar Maid, The Last of England), and the only redheaded version of Rosetti's Proserpine, and a version of Beata Beatrix which I like better than the one in the Tate as the dove is white and the poppies are red - the Tate's version has the colours the other way around. I believe the bulk of the collection is drawings, so perhaps they keep them archived to protect them from light damage.

The Staffordshire Hoard is also on display at the museum, and as I did two years' courses in Anglo-Saxon as part of my degree, I was keen to see that. It was, shall we say, popular with children. (Very noisy!) The hoard was mostly items accumulated and squirrelled away, presumably after a battle, and while the workmanship of the pieces is impressive, and the possible origin of the hoard as a whole and the items within it intriguing, seen all together it is mostly a lot of fragments.
We got lucky with our hotel; Mr Robot was treating us so we stayed at a plush one, the MacDonald Burlington, and got put in a suite! No idea why they did that for us, but it's always nice to get an unexpected upgrade. That said, if you're on a tight budget, places like the Travelodge are just as central.

And on Wednesday Tinny Tim went to the cricket. I wasn't entirely sure if I should take him, because part of the attraction of the cricket is the chance to sit in the sun drinking beer for eight hours or so, but I decided he'd probably be safe enough if I confined him to my bag most of the time. My favourite cricket ground is Lords, but then I'd only been to Edgbaston once before, for a rain-soaked one-day match between England and the West Indies. This would be the first day of a Test match**, and not just any Test match but an Ashes test too. The 'Ashes' – England versus Australia – is one of the biggest events in the cricketing world, and definitely the biggest for England and Australia fans. If you want to feel the passion and pride, and enjoy the banter and singing, of cricket, it's the thing to go to.
Before we went to our seats, we had a breakfast bap. Actually, it was a breakfast brioche. Very fancy. And very tasty! Other foods consumed during the day were lamb curry and a pork soft taco, both very good - there's a huge food area with a wide selection of things on offer at the ground. I also tried the Edgbaston Cheese Crunch as I'd seen it mentioned on the ground's website but had no idea what it was. Basically, it's macaroni cheese covered in breadcrumbs and fried. Probably not very healthy, but I enjoyed it. Anyway, the cricket: it went very well, actually. England bowled all the Aussies out in the day, even though we'd had a few breaks for rain, and our position, just to the left behind the bowler's arm, was perfect.

Birmingham is definitely a nice place to go with a toy robot. Or even without one.


*If you've found your way here looking for Sabrina sauce, go back to Google and search for “Best Of Our Beautiful Sabrina”. I believe B.O.O.B.S. supporters get access to all sorts of galleries of the lady in her prime.

** The longest form of the game, up to five days, played only by the ten nations to have achieved Test status.
Labels: Birmingham cricket nice places to go with a toy robot