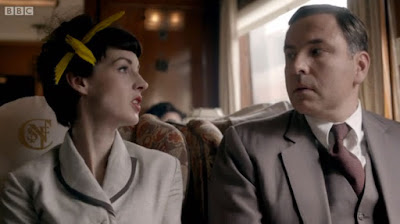 I had a mixture of hopes and fears for the new TV version of Agatha Christie's Partners in Crime stories. On reflection, it wasn't awful, but I didn't fall immediately in love with the programme.
This episode was the start of an adaptation of The Secret Adversary, written in 1922 but hinging on things that happened during the First World War. Updating it to the 1950s has worked fairly well, and I expect the First World War/ Bolshevik elements from the original novel will translate into Second World War/ Communists in the series. While the plot looks like it should remain fairly true to the source, the same cannot be said of Tommy and Tuppence themselves.

Tommy and Tuppence Beresford are unusual for Christie characters because they aged as she wrote the books: bright young things in The Secret Adversary, and elderly by 1973's Postern of Fate, so for this programme's Tommy and Tuppence to be grown up in the early 1950s is fairly reasonable. Christie's Tommy and Tuppence likewise had children, though they had three, not one. However, the programme's Tommy is a bit of a buffoon, and I really didn't like that. I had wondered how Walliams would take to a role packed with Dick Barton-style derring do, and the truth is, they took out a lot of his daring and charm. Mr Robot's assessment was that he could see Walliams' Tommy as a George Smiley type but not a Dick Barton, and I thought that was a pretty good assessment. Man of action he is not. 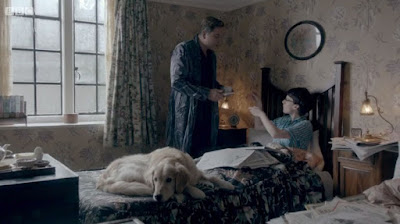 Jessica Raine made a more expected Tuppence - you can really imagine her as having been a Bright Young Thing, though as Mr Robot repeatedly pointed out, the role belonged to Tamsin Greig. It's hard to imagine why Tuppence is married to Tommy, and I can't help hoping that after all the allusions to his wartime accident, they give Tommy some hidden depths. I didn't like Tuppence's hats as they never go with anything else she's wearing, and maybe that's a visual clue to her character as everything else she wore worked well, but it just jarred terribly to me as women in the 1950s were much better co-ordinated.

What did I like? I loved the look of the thing, with proper period settings, and nice touches like areas of London still bomb-damaged from the war. The Beresfords' home is just adorable, with its bold wallpaper and oddly-shaped windows - and I loved the fact that the production designers hadn't felt the need to go all atomic to prove LOOK THIS IS THE 1950S, SEE? There are people of colour in this, which shouldn't be remarkable but, frankly, in a Christie adaptation, isn't that common, and it's something I welcome in costume dramas. I like the fact that the story is being told over three episodes rather than crammed into one; too many programmes nowadays get shoehorned into an hour and it's nice to see something longer.

So, the Robot jury's still out on this one, but I know other vintage lovers enjoyed it thoroughly. Did you watch it? What do you think?
Labels: 1950s crime television