I took delivery of a new old dress at the weekend - a grey wool late 1950s jobbie with a slim skirt and 3/4 sleeves. This is an odd time of year to be buying wool dresses, I suppose, but I got it because it was on sale on Etsy and the price was too good to resist.. It'll be just as wearable in three or four months' time. With that and my new 1960s pink cutwork shift (swapped for a silk Trashydiva dress I'd outgrown) I'm doing quite well for frocks this month.

On the subject of cutwork, I spotted a moth in the bedroom and immediately went into full MOTH PANIC mode. (I am to moths as McCarthy was to Communists...) This meant checking all my Zensect balls were in place and still orange (they go white when they're no longer working), putting more Zensect balls and other moth killers around the place, and checking over things that don't get fully looked at too often, such as the trunk with some of my well-loved but far too small 1990s garments. Amid the crushed velvet and other relics of my gothspent youth was the dress I wore to a university ball in 1997. I think it's from the 1970s, but it's 70s-does-Edwardian, and it's got cutwork from hem to waist, and up the sleeves. The embroidery reminds me of zardosi and resham work, so I wonder if it was made in India. Every time I see this dress the workmanship astonishes me. There's a damaged area near the hem, and I keep meaning to get some organza or similar light fabric to support it. It's still lovely, though. 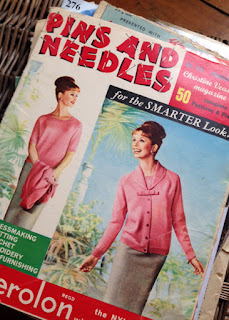 And when you're emptying things, you find all sorts of stuff that you'd put away and not really thought about, which in my case always means knitting patterns. I've mostly accepted that my personal style, clotheswise, leans very much towards the late 1950s and early 1960s, but the knitting patterns of that era aren't my favourites. By about 1962 everything's got quite boxy and plain, and I didn't learn to knit so I could spend my life in the equivalent of a school jumper! I do keep going back to this twinset pattern, though. Something about the shawl collar and bow on the cardigan sets it apart. They're quite dated details for 1962, when this magazine was published, but I get the feeling from looking at copies that Pins And Needles was quite fuddy-duddy for its era, and that its readers didn't want to look too up to date. Hence the slightly 1950s details. 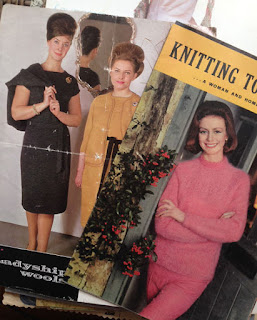 I also found an ace pattern for a knitted dress. I know, I know, SLOW KNITTER, STEP AWAY FROM THE DRESS PATTERN! It'd probably take me five years to make one of the dresses. But I can just picture myself in it... and look at that beehive. Look at it! Can't you just imagine it knitted in a tweed yarn with one of my nice brooches on? I can. (We won't talk about the Fair Isle cardi that I still haven't finished sewing together, or the grey jumper I bought wool for and haven't even started.)

Finally, I have a little news on the burlesque front. I'm not going to be dancing in the troupe dance... because I'm going to do a solo dance! Yes, I'm actually going to be doing a proper performance, as long as I can develop a routine and polish it to Dulcie's satisfaction. (She won't let anyone on stage who's likely to embarrass themself and, by extension, her. She's serious about burlesque, hence has trained a number of people who now dance on stage regularly.) I am so excited about this. I'd hoped to be good enough for the troupe dance, but to be able to go it alone... the excitement! I will talk more about this as the time approaches. No spoilers for now.
Labels: burlesque clothing knitting