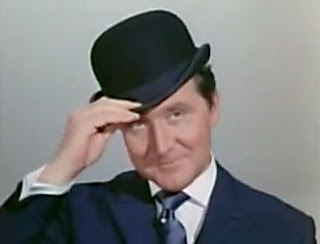 I was watching an episode of The Avengers tonight when I heard Patrick Macnee had died. I love The Avengers: it's one of those bonkers British midcentury series that you either adore or just don't get. Macnee played many roles, but John Steed is the one he will always be remembered for. Immaculately dressed, driving vintage cars and drinking champagne, he was in many ways an Edwardian, perfectly balanced by a succession of liberated, sparky and completely modern female agents. Rarely irritated and never ruffled, he faced the world with a raised eyebrow and a furled umbrella.

You could say that the gentleman adventurer-spy is something of a British archetype, going back to W Somerset Maugham's fictional character Ashenden, John Buchan's Richard Hannay, and even Leslie Charteris' Simon Templar. No-one does private eyes like the Americans, and no-one does gentleman spies like the British. Steed joins that lineup of suave, moneyed adventurers, and influenced similar ones in popular culture afterwards: if Harry Hart, Colin Firth's character in Kingsman: The Secret Service, wasn't a nod in Steed's direction I'd be very much surprised, especially given the Kingsmen's use of umbrellas.

It's saddening to say goodbye to Patrick Macnee so soon after Christopher Lee - and Macnee did twice play Watson to Lee's Holmes. Here's hoping no more of that era's best-loved actors pass away any time soon...