This was the third year Mr Robot and I had gone camping at the Vintage Nostalgia show. It's interesting how much it's grown; in 2014 weekend camping tickets sold out fairly quickly, and this year they sold out waaaay in advance. I'm not surprised at that in some ways, as it's a small, friendly event in the beautiful Wylye valley in mid-Wiltshire.


This year the facilities included the cocktail lounge. In 2013 there was just the one marquee, and in 2014 that was joined by a small tent near the food trucks, with room for maybe 20 people, where people played guitar or jammed informally. For 2015 the organisers turned that into a good-sized tent complete with cocktail bar and live performers, and it was a lovely little second stage. The cocktail lounge felt more relaxed than the main marquee, and it was easy to bimble between the two depending on what acts were on.
The vehicle display is always a tremendous highlight, though I was sad that the cute teardrop caravans, which are usually close to the main part of the site, were nowhere to be seen - I'm guessing they'd been relocated to the vintage camping area. It's fun to look round the classic cars and admire them all. Mr Robot and I usually end up falling in love with something massive and American with fins like a shark, and there were several beautiful, enormous midcentury cars in the lineup. We also loved the frogeyed sprites because they're the happiest little cars in the world - that's the top-right one in the collection of cars below. Look at its smily face! Where the teardrop caravans usually go, there was a WWII display, with military vehicles and tents, and even a field gun which got fired from time to time. 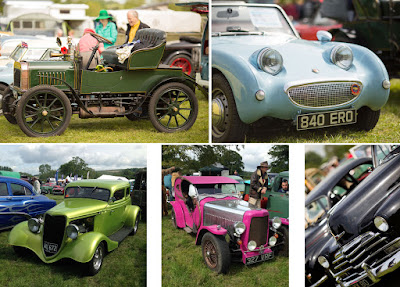 There was a good selection of stalls. Shopping is always enjoyable at the show. I pounced on Heyday! on the Friday; I'd been considering buying a pair of high-waisted trousers for ages and wanted to see which size would fit me best. Shona was really helpful and showed me how the inlay included in the construction of their trousers means you can have them adjusted to get a precise fit. Sadly, it turns out that my apple body type really doesn't look good in any size of high-waisted trousers, so I wound up buying a 'wonky wedges' Judy dress instead. On the Saturday, from other stalls I also got another dress and an old Vogue Knits magazine, and the Mr got a leather jacket, so we were happy shoppers indeed. We also dropped by In Retrospect's stand to say hello to Mat and Ava. (I've got a feature in the new issue, but I'll save talking about that for another post.) And somehow, despite knowing she was there, I completely missed Porcelina all weekend!

The food was also excellent, as usual. We didn't even bother taking a camping stove this year! From wood-fired pizzas to pulled pork to pies to salad, it was all there if you wanted it. Plus crepes if you fancied pudding afterwards. (We did. Twice.)

In past years the entertainment has felt strongly leaning towards the 1950s/rockabilly side of things, but things were more diverse this year, with acts including a skiffle band, a gramophone DJ in the cocktail lounge, and a couple of female harmony trios. The skiffle group, Railroad Bill, did a song involving chicken noises, which is by far the funniest thing I've heard in months. Even the music outside the beer tent was good - it's brilliant to go somewhere and hear unfamiliar vintage music.
The 1940s outfits to be seen on festivalgoers definitely got my vote for best overall, because they looked accurate and the wearers looked completely at ease, as though they dress like that all the time. It gave the impression of 'clothes' rather than 'costumes'. The mature gents holding an impromptu game of cricket were entertaining, and there were some very dapper people in military uniform too.
If you're interested in trends, prom-dress-with-victory-rolls seems to have had its day; updos plus scarves were what a lot of people were going for. I felt like there was less genuine vintage clothing to be seen overall than in previous years, especially on the younger festivalgoers, who favoured either 50s/pinup repro dresses, or modern clothing with vintage accents such as a headscarf or red lippie. I think as the event's popularity has grown, the emphasis has shifted a bit from 'vintage' to 'festival', and the clothing to be seen reflected that.

I remembered to book an appointment with the Vintage Hair Lounge (if you don't prebook, you've got no hope of getting in), and in a complete stroke of luck got Gemma as my stylist - somehow she remembered doing my hair in 2013. Well, I had a lot more to work with this year, and she did an amazing job of putting it into a giant red beehive. 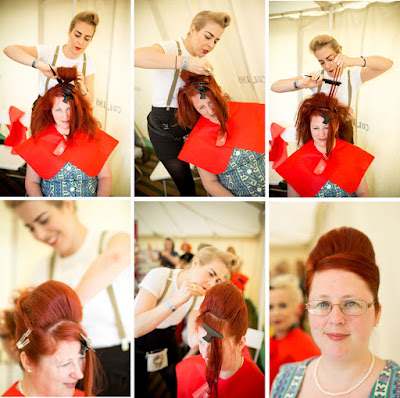 I planned my Saturday outfit to go with the beehive, popping on my Top Modes dress for a bold 1960s look. On the Friday I wore a 1940s jumper and trousers during the day (it was raining and we had to put the tent up) and a late 1950s/early 1960s Mode O Day dress in the evening. 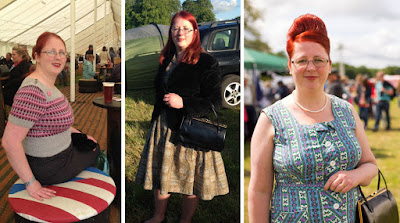 Now for a grumble. Not owning either a vintage car nor vintage tent, we've always gone in the standard camping and had a super time. This year the campsite felt VERY crowded and, unfortunately, we got put next to a noisy family who lit a fire every night, and the smoke blew all over our tent. So, we got very little sleep, resulting in us being too tired to stay up for the late evening entertainment, and everything stank of smoke. I also found a small burn hole in my side on Sunday morning and am counting my lucky stars that it was raining so heavily - had the tent caught light thanks to their carelessness, I might not be typing this now. Anyway, the camping side of things kind of spoiled the weekend for me. That makes me feel quite sad, because I had such a good time in 2013 and 2014. I wish I'd had more chance to meet up with people as that might've balanced out the camping side of things. Ah well, maybe next year, or at another event...
Labels: events wiltshire