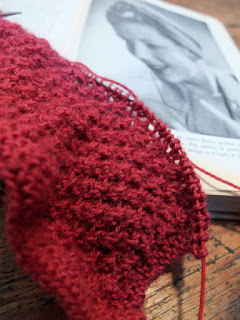 I haven't done many big things in the past couple of weeks, but I've been having a fun time bimbling around. I have finished all the knitting on my fair isle cardigan, which just leaves the making up to do. I don't detest sewing seams as much as many knitters, but there are SO MANY ends to weave in on the cardi that I admit I've been dragging my feet over it a little. I've started knitting a turban hat from a wartime pattern as a bit of light relief. Somehow watching telly doesn't seem half as lazy when I'm making something at the same time!


The turban is a two colour one, and I'm making it in berry and charcoal grey Excelana. It's growing so quickly in comparison to the cardigan! (The berry shade looks very red in the photo, but it's actually rather dustier looking.)

On the telly front, I've been watching lots of The Avengers, by which I mean the 1960s show with Steed and Peel, not Marvel. While even Diana Rigg in her prime will not convert me to wearing Crimpelene, I do greatly enjoy the look of the show. It's so colourful, and while parts of it are clearly filmed on studio sets, the artificiality works because so much of the script is bonkers anyhow. Watching 'Never, Never Say Die' with Christopher Lee so soon after his death was particularly poignant - and oh, wasn't he handsome in his prime? My favourite so far has been 'The Winged Avenger' for the Batman parody, especially the fight scene at the end.

On which note: we are getting Agent Carter in the UK. It's starting on Fox on the 12th of July, hurrah! 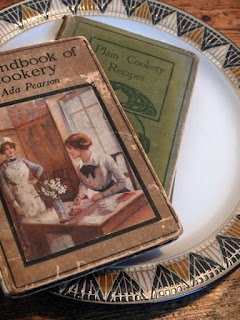 It's been a dry old time at the charity shops as far as clothes go - the hospice shop has opened up a 'vintage' section but it seems mostly 80s and later to me, not even much from the 1960s. Part of me wonders if the drive in recent years for people to 'declutter' means there will be less vintage clothing hitting charity shops in the future, as people simply won't have it kicking round in attics or at the back of wardrobes. However, we've had a bit of luck with other stuff. The two little Edwardian cookbooks were a recent find, and we picked up six of these Denby plates for £3.50. That's for the whole set, not each! They're not vintage as the pattern ('Boston Spa') was only discontinued in 2001. We really needed some everyday plates to replace the battered, chipped ones we had. The old plates had had a good innings; some were ones my mum gave me when I went to university in 1992, but it's lovely to have some smarter ones for daily use. Denby did some fantastic patterns in the 1990s, 'Luxor' was one I especially loved. 'Boston Spa' plates like these go for around £15 each at china replacement firms, so at less than 60p each we got a proper bargain.