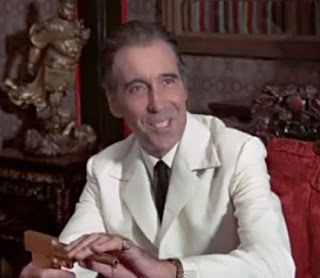 I know I'm not alone in being saddened by the death of Christopher Lee. (Melanie's already done a tribute over at The Folly Bird.) I think what I've found heartening is how many people have really good memories of him, and how many have favourite films - and how different those films and memories are. He seemed to deliver so much entertainment to so many people in so many ways.

I had a big crush on him in my teens, and Christopher Lee remained a favourite of mine to the end. I still have the photo I bought of him when I was at university (tn those pre-internet days, you could buy pictures of movie stars from special catalogues), plus a whole stack of videos.

Elegance is a rarity in men nowadays, but back in the Golden Age of Hammer, that little British studio had two incredibly elegant actors sharing the screen, Christopher Lee and another favourite of mine, and 2014's Bloofer Gent, Peter Cushing. Lee was the perfect choice for Dracula, tall and aristocratic yet able to convey a hint of threat... which would boil over. Some of my favourite films of his include Dracula 1972AD, The Wicker Man, Gremlins 2 (seriously, it's brilliant), The Man With the Golden Gun and all three Lord of the Rings films. Not sure whether to include Beat Girl on this list... oh, why not? The Last Unicorn, for which he provided a voice, makes me cry still.

In real life he'd been a Nazi hunter, and was in Special Forces in the Second World War (some of his work is still classified). He released his last heavy metal album last year. Frankly, if you told someone about Christopher Lee without naming him, they'd say you were making it up. And so farewell to the sinister sauceboat whose real-life exploits matched up to the unforgettable screen personae.
Labels: crumpet RIP