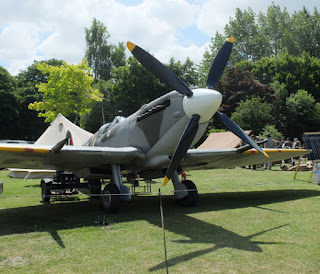 I thought I'd share a few snaps from the re-enactment/history side of things at this year's Armed Forces Day celebrations in Trowbridge. We've got a lot of 1940s re-enactment groups here in Wiltshire, and they always put on a good show. This year the event was due to have a more Air Force leaning, and one of the highlights of the re-enactment area was a Spitfire. During the war Spitfires were made in the town, so it's good to see one on show. I wonder how many of the elderly ladies wandering round had helped put planes like that together? 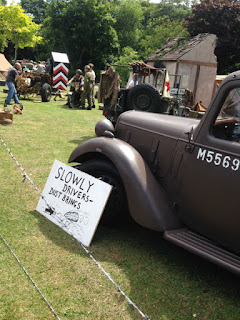 Last year's celebrations were really good, but this year's were a little disappointing. I'm kind of torn within myself because while I wish we didn't need a military, I also deeply respect the fact that they do what needs to be done, and appreciate the sacrifices they make. So seeing a lot of military apparatus makes me very thoughtful. However, this year there seemed significantly less on show, both in the re-enactors' field and the currently serving one. Moreover, the stalls for the armed forces charities were away from the bandstand, while the ones nearer it were for companies like Avon or fairground-type snacks! I'm sure Nandos is very nice, but no-one goes to an Armed Forces Day event to see the Nandos chicken wandering around. I don't know if there was a bigger event going on elsewhere that drew away a lot of the serving soldiers who would usually participate, or the higher number of re-enactment events around the county meant fewer of them were able to turn up, but it did surprise me. 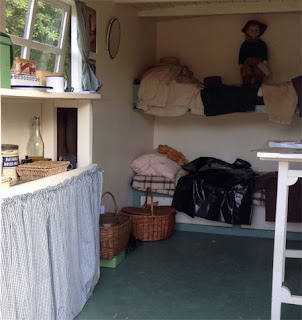 Anyway, as I said, the people who do exhibit put heart and soul into it, and that certainly wasn't lacking. As well as the Spitfire, another thing I hadn't seen before was a replica of land girls' accommodation. The living history side of things really helps people, especially children, engage with events in a way that a book or film never will.

Last year, the centenary of WWI, there had been a muck trench erected, plus a display all about soldiers from the local area who'd served during the war. This year's local history display was about the Gallipoli campaign in particular. Seeing local names, local faces, helps people feel the true horror in the numbers, I think. Most of the allied forces who died there were Anzacs, Australian and New Zealand servicemen, and the display certainly didn't ignore that fact.

So... I think this year's event could have been a bit more about the Armed Forces and rather less about candyfloss, local exercise classes or fast food. Hopefully by next year the event will have rediscovered its purpose.
Labels: events wiltshire WWI WWII