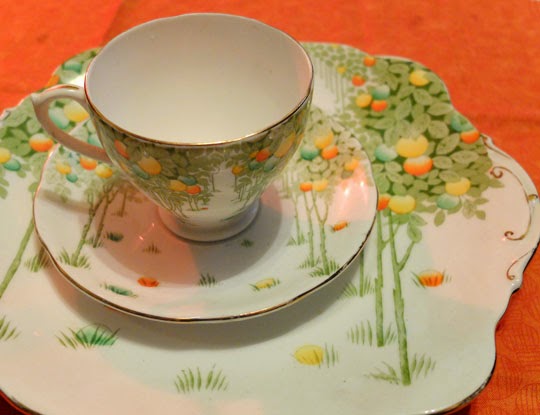 I've wanted a vintage tea set for ages. I don't know why. I do actually have one tea set, which my mum collected piece-by-piece when I went to university, using tokens from the local supermarket. That's 1990s - 1992, to be precise - so I suppose as far as some sellers would go it would qualify as vintage, though I haven't noticed a growing market for 1990s homewares in the same way as I have for 1990s clothing. (Tip: basically, you can't go wrong with pine furniture and slapping sun, moon and stars designs on everything.) Anyway, I've been kicking myself for the past few years for not snapping up a gorgeous Shelley set when I saw it for sale in Rolfey's in Bath. 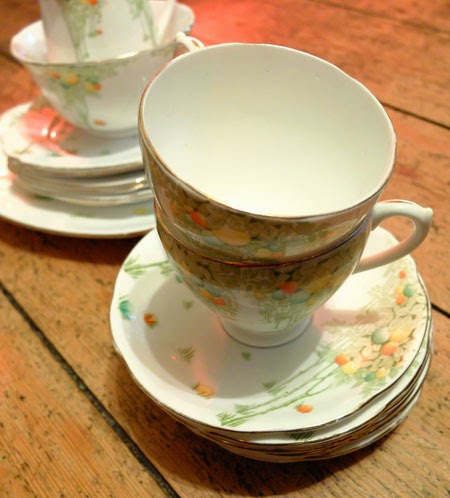 I usually trawl round my local chazzas after my weekly trip to the butcher. What I needed was a little jug for work. When I moved from Simply Knitting to N-Photo, my lovely knitty workmates gave me a teapot, because I'd been going on about finally having room for one on my desk. Best. Leaving. Gift. Ever. The problem is milk: I make my pot of tea, and take it back to my desk, but have to make do with putting a pot's worth of milk in a little plastic cup, which seems a waste of plastic cups and doesn't look nice. And my luck was in yesterday; I found a gorgeous little Sylvac jug (meant for mint sauce, given its green colour and leafy design, but I don't care) in a hospice shop. Like a numpty I forgot to photograph it, so you'll have to keep an eye on my Instagram (mim_crinolinerobot) if you want to see it.

There wasn't much in any of the other shops - a couple are usually pretty rubbish anyway, but even Age UK, usually my Happy Hunting Ground, has been poor of late. I swear you couldn't move for pleated tartan wool skirts a year ago, but all the blighters have vanished now I want more! I decided to drop in to the house clearance place too - it's not priced much differently to the charity shops and tends to have larger items. And there it was, a beautiful deco set. Now, it's only got two cups, which I suspect accounts for the low price (£35). However, cups can be easier to come by than other elements, and the set had its sandwich plate, sugar bowl and milk jug. The shop had a couple of more complete, but later sets, which struck me as 1950s, and an amazing 60s/70s Denby dinner service - I didn't look closely, but I think it was the 'Arabesque' pattern. 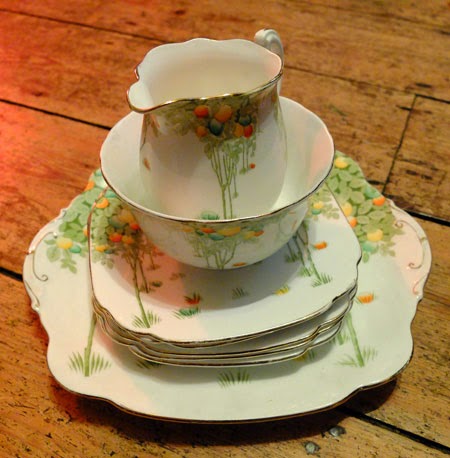 I didn't need a tea set. But oh, how I wanted it! It was the fantastic green, orange and yellow colours, and the square plates, all so typical of the late 1920s and early 1930s. And lovely Mr Robot said, "You've been going on about one for ages, and it doesn't matter if there are only two cups as there are only two of us." So I bought it. He's probably hoping for cake!

There's no maker's name on the set, which I assume means it was fairly cheap in its day, though someone has loved it and cared for it as there's not a single chip, and the gilding is mostly intact. The design is transfer-printed, with the darker green, yellow and orange and the gilt edging handpainted on. All there is on the back is this stamp: 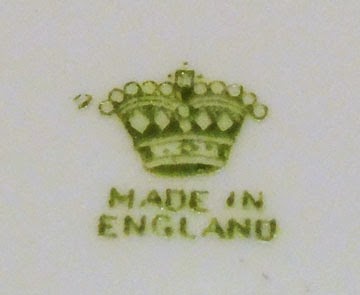 If you know the mark, I'd love to know the maker, just because I'm nerdy enough to want an accurate date for the set, and a name would help me track down a few more cups. I have six saucers and seven tea plates, so if I add a few cups I'll be able to invite my friends for tea...
Labels: 1920s 1930s charity shopping drink food homewares