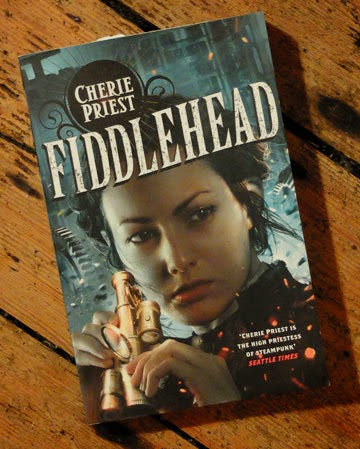 I read a lot of steampunk, for both work and pleasure. This is one I picked up in an office move at work, and it definitely counts as pleasure. I read the first volume in Priest's 'Clockwork Century' series, Boneshaker, for SFX magazine, and really enjoyed it, so when I saw the final volume I snapped it up (both work as standalone stories). I enjoyed them both so much I plan to buy all the others.

In Boneshaker, an engineer's experimental drilling in Seattle caused the release of a heavy but toxic gas: it didn't rise far, but anyone breathing it became a shambling, senseless thing. The solution? To wall in all of Seattle. That novel mostly follows the inventor's widow, who in the early years of the American Civil War crosses into the walled city to find her son, who's gone back inside. From what I've read, subsequent novels follow the lives of airship pilots, nurses and other people caught up with both the war and the zombie-like humans.

Fiddlehead is set on the opposite side of America from Seattle. It is 1879, the American Civil War still rages (in real life it finished in 1865), and Gideon Bardsley, an African-American scientist has invented a thinking machine he calls 'Fiddlehead' to work out how the Union forces can defeat the Confederates. The answer he gets, before it is sabotaged, is terrifying… There's a strange condition affecting both armies, with men ending up deathlike and violent (sound familiar?), and it could end up destroying both sides before either one wins. How can Bardsley and other friends and employees of Abraham Lincoln bring about peace and put a stop to the mysterious condition?

I don't know much US history, 20th century film and music aside, but even I knew who Abraham Lincoln was. In Priest's world technology enabled him to survive the assassination attempt, an injured but still powerful man. Ulysses S Grant is president. Priest mixes in other real people too, and it was fascinating to read the Wikipedia entries for some of them on my iPhone. Belle Boyd aka 'the Confederate Cleopatra', and Captain Sally Louisa Tompkins, were both new names to me but had incredible real-life stories. Priest plays brilliantly with history, reworking it in way that could be possible – which is what the very best steampunk does, in my opinion.

While reading Fiddlehead I was frequently taken aback by how many women and people of colour there were. And you know the sad thing? There weren't that many, but there were more than you'd usually see and it felt like a lot, possibly because they felt like genuine characters. Gideon Bardsley wasn't just there to create a thing for white men to use while he faded back into the woodwork like a convenient ghost. He's a real person, a difficult one in his way. Belle Boyd is hard-edged and proud, a proper three-dimensional character too. Priest hasn't fallen into the 'white man bad' trap, however – though I won't tell you much about the villain, you'll have to read the book to discover that for yourself.

Steampunk can be good at challenging historical attitudes and assumptions, but I think Cherie Priest has done more than that. She's brought real historical figures back into focus, and has created fully-realised fictional ones from a range of under-represented groups, all wrapped up in a cracking good story. Recommended.
Labels: books steampunk