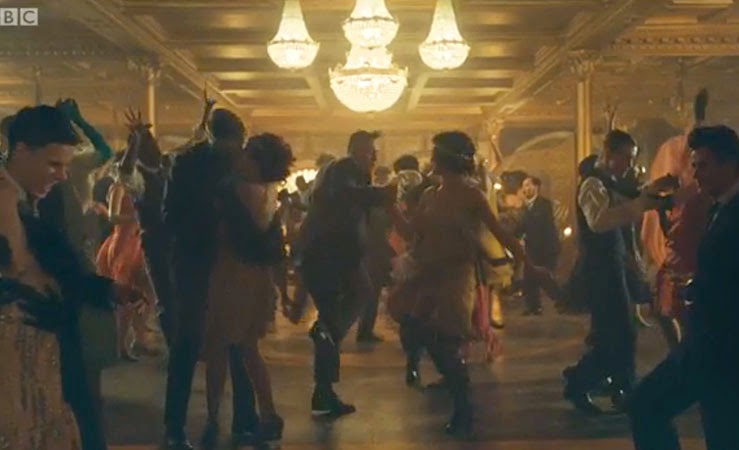 Before I go into the costumes I will say this: if you missed the second series of Peaky Blinders, you really did miss out. It was so much better than the first - and that was excellent. It's violent, and nasty, and the soundtrack may not appeal to everyone (though I think the music of Nick Cave, PJ Harvey et all works even better in this 1920s show than Jay-Z's one did in the most recent film version of The Great Gatsby), but I loved it. It covers an aspect of British history, the history of the criminal and working classes in the Midlands in the early 20th century, that usually gets plastered over by Downton Abbey-style schmaltz. The gritty industrial settings are really impressive, and make glitzy locations such as the Eden Club stand out all the more.


So, things have moved on, and it's now around 1921. The classic 'flapper' look that we think of now as a hallmark of the 1920s hadn't really become fashionable. (In fact, film star Colleen Moore is credited for starting the craze for the bob when her film Flaming Youth was released in 1923, two years after this show is set.) Ada Selby does have a bob. She was always a rebel, and with her brother Tommy's gift of a London house seems to have calmed down while remaining unconformist; her lodger is a gay anarchist. Her costuming reflects her increased wealth and bohemian spirit. A lot of it is loose and flowing (and more like dressing gowns than actual clothing), and bold prints are a frequent feature. Of all the characters, Ada embodies the spirit of the jazz age.

You can contrast Ada strongly with another Shelby, Esme, the Romany girl who married into the family. Esme's more old-fashioned clothing suggests she might not have as much spending money as Ada, though the second outfit above looks more modern. With her tousled hair and slightly dated appearance, I see Esme as echoing Aunt Polly, the Shelby matriarch as much as the stereotype of the fierce Roma lass. This is the Shelby equivalent of power dressing, and in resembling Polly, Esme is sending out a clear signal to the men in the family that she will not be messed with.

Tommy has two love interests in this series, aristocratic widowed racehorse trainer May, and now-married Grace. Grace has married a rich man and her costumes are gorgrous, but they don't feel particularl accurate. The slinky emerald satin dress, in particular, is far too fitted for 1921. Frankly, Grace annoyed me in the first series when everyone was supposed to fall for her blonde hair and beee-yooo-tiful singing voice, and she annoyed me in this one too. So I was rooting for Tommy to end up with May, who has a nice line in cardigans and could probably hold her own with a shotgun. 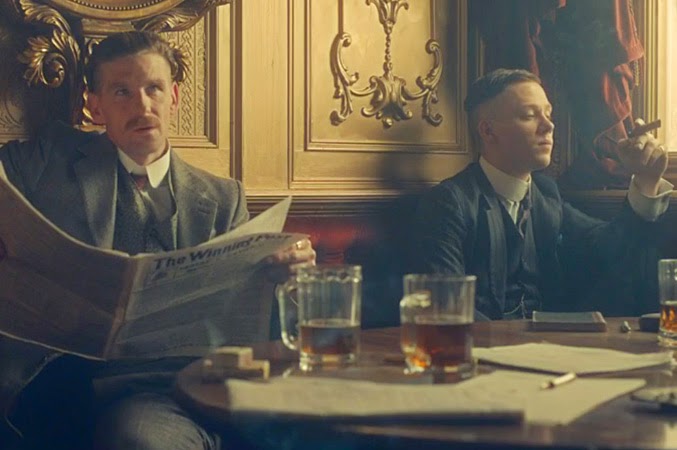 The Peaky Blinders' look was well established in the first series: White shirts with rounded collars, heavy wool coats and, of course, the tweed flat cap with razor blades hidden in the peak. Then there's that haircut. I've seem various people arguing online about the authenticity, though I've yet to see a photo of the real Birmingham gangs of the era with the same one.

In this series two London gangs are introduced, Alfie Solomons' Jewish gang and Darby Sabini's Italian one (both named after real gang leaders of the era, just as Billy Kimber was in the first series). Minority groups sticking together, working together. The looks of the gangs are very different. Solomons has a bakery as the front for his operation, and he and his men wear loose shirts of coarse cloth, clean clothes for working in the heat. Sabini is the man with the power and the more glamorous operations, owning the Eden Club, and his men dress far more expensively. Theirs are the suits in light greys that would show dirt, high collars and smart silk ties. I found Solomons a much more intriguing character than Sabini, as he seemed more complicating, allying first with one gang, then another. What motivates him? How does he relax? I hope we see more of him in the third series. 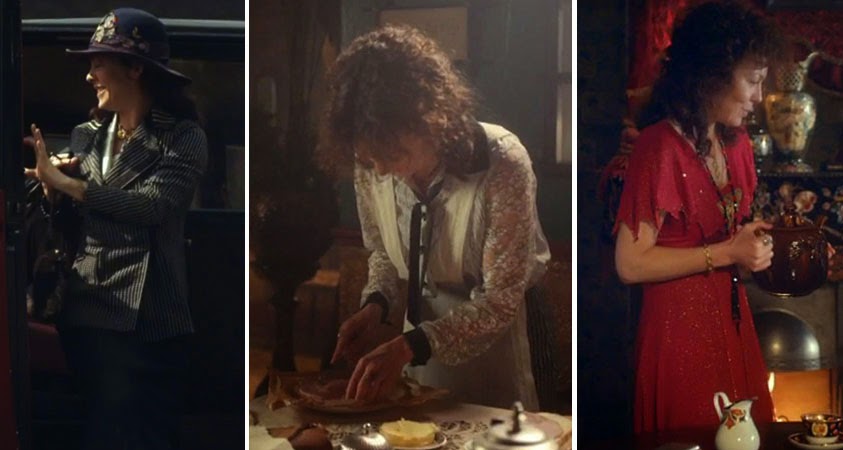 Finally, my favourite character, and by far the most interesting in terms of costuming: Aunt Polly. I mentioned in my brief writeup last year that she had a vaguely Edwardian look, like an ageing Gibson Girl, and I was chuffed to see an interview actress Helen McRory did with Vogue where she said it was deliberate. You got a fantastic sense of who Polly is in this series as, Gatsby-like, she tried to bring people back into her life and rewrite history.

There were two Pollies, there was the Polly she wanted to be with a respectable new house in the suburbs and a well-behaved son, and the Polly she was, rough and determined, prepared to go against every rule of polite society for her family. You see this in her costumes, where she dresses smartly for her smart house, and more roughly at the Blinders' centre of operations. In fact, I don't think any other character had such a variety of costumes, so many mood displayed so boldly in cloth. It takes the brutality of Inspector Campbell to make her put aside her daydreams of a safe, nice life and be the true Polly once more, ironically at the moment her surface is at its most respectable.
As I said, it's a brilliant series, and if you missed it, I heartily recommend you catch up with it.
Labels: 1920s costumes crime television