Doom with a view - times two! 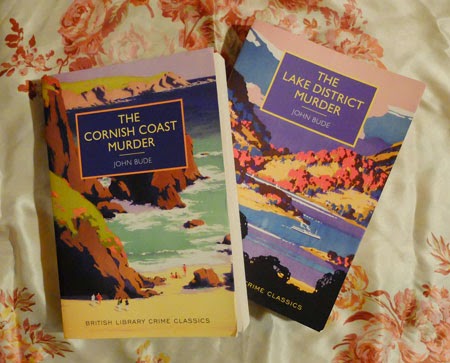 Aren't these covers smashing? Both The Cornish Coast Murder and The Lake District Murder are from the British Library's range of reprinted vintage crime novels, and were originally published in 1935. I know it's always considered a faux pas in reviewing circles to talk about book covers, but I reckon these ones, with illustrations taken from 1930s railway posters are wonderful: appropriate for both the time and settings of the stories.

Both books were written in quick succession by the same writer, though despite the similarity in the titles the characters are completely different. (I anticipated some continuity of detective.) They're also quite different in feel. In The Cornish Coast Murder an unpleasant man is shot in his dining room, and the story follows the local vicar and police as they try to uncover the killer. It's very much a character-based story, and fans of forensics in Golden Age mysteries will love the vicar's method for finding the shooter's location. The Lake District Murder, on the other hand, is rather more active, with organised crime featuring heavily, though there is a similar attention to detail in the detection as Inspector Meredith works out tanker volumes, delivery amounts and more.

One quirk I found fascinating was the echoes and shadows of war. One suspect in the first book is a man still suffering from shell shock as a result of the First World War, while the victim in the second is described as having a 'Hitler moustache' – of course, at that time no-one knew what horrors Hitler would lead people to commit, and it was a style distinctive enough to be identified with the political figure, without yet carrying connotations of atrocity. Often crime novels from between the wars can feel quite detatched from either event, so it was intriguing to see these references.

As a murder mystery it's actually the earlier book that's the most satisfying. The details of the killing aren't completely uncovered until well into the story, and there are plenty of suspects and possible motives. The Lake District Murder, on the other hand, is all too easy to find a motive for – you'll have worked out what's going on long before Inspector Meredith – and that makes it fall a little flat. John Bude went on to write a whole series of books about the Inspector, however, so perhaps 1930s readers didn't agree with me. Maybe he develops as a character over the subsequent volumes.

I bought both books from Waterstones. At the time I was really excited to see Golden Age crime novels coming back into print, but right now I'm not so sure how I feel about these particular ones. I think it's the price. At £7 each, even if you're able to get them on a three-for-two deal they're not cheap, and if you hunt around you can get genuine vintage green Penguins for the same price or less. And yes, these particular stories are very hard to find, and collectors pay a lot for original editions. However, I'm not a collector, and the reason I read vintage crime novels is for the stories, not for the rarity. I don't mind so much if I pay £2 for a battered old book and don't enjoy it, but for three times that much I expect something more satisfying, and from the British Library I expect the best of the best. Maybe I have quite an outdated approach to book pricing; I remember when some paperbacks cost less than a quid, yet as someone who works in magazine publishing I know how sharply paper costs have risen in recent years. While £7 seems a lot for a paperback to me, it's not actually unreasonable, but still I balk at it.

So, will I buy more books in the series? Almost certainly, in addition to my usual secondhand book purchases, though as I bought a batch all at once I've still got some waiting to be read anyway. Do I recommend you buy these particular ones? That's tricky. It depends on your levels of disposable income. If you're watching the pennies, I'd recommend trawling your local secondhand bookshop for other vintage crime at a much lower price.
Labels: 1930s books crime