How to plan a tea party away from home 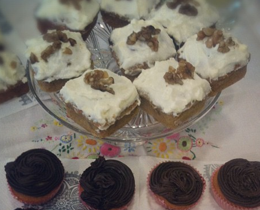 My editor had a birthday recently and we decided to throw her a tea party at work. I ended up doing most of the baking, so I thought I'd share some tips in case you're doing a tea party that's not in your own home.

TIME
Before you make anything, how much time do you have? If you have a whole day beforehand you have time to make pretty much anything, but most people are more time-limited. I had several evenings before the party, which meant I could spend one evening baking things that would keep for a couple of days in the freezer (scones and fairy cakes), one on things that would keep in a tin for a couple of days (carrot cakes) and the last night on things that needed to be very fresh (pastries) plus icing the cakes, with the final freshest bits (sandwiches) being done in the morning before work.

If you only have a short time, be prepared to say 'Nuts to it!' and buy some stuff, and if you do have to buy stuff, make the things that are easy to transport and buy in anything potentially messy.

VARIETY
You need cakes and savouries, ideally at least three sorts of each.  Mini tartlets and cheese scones make nice non-sandwich savoury additions, and tartlets can be prepared the night before and scones several days earlier and frozen until the night before. This is a big timesaver as sandwiches have to be fresh, and if you only have to make one sort on the day it's a lot quicker. If you prefer to do only sandwiches, do vary your breads – three fab fillings won't be half as appealing if they're all served on sliced white. At the risk of making a generalisation, men tend to like savoury things. Something like individual bacon and egg flans or even spicy chicken bits on cocktail sticks go down very well.

Variety of cake is just as important. Fruit scones get a big plus for keeping (hello, freezer!) but think about how you'll transport and serve the cream and jam. I baked fruit scones as part of my editor's tea party, then decided against taking them when I realised I'd need dishes for cream and jam, and there was a risk that my knives would disappear into the canteen cutlery drawer if people left them lying around by mistake. The fewer things on your menu requiring cutlery, the better.

Double a basic sponge mix and you can make several different cakes. Make small cakes as they bake more quickly than large ones and don't need cutting. Take some of the mixture and stir in chocolate chips to make choc chip fairy cakes, ready to top with chocolate fudge icing. Grate lemon zest into some of the mixture, bake in little square tins, top with lemon glace icing and you've got deliciously different cakes from the same mixture. Add vanilla essence, bake in paper cases and top with pretty coloured buttercream for nice fairy cakes. This means you can make several very different-looking cakes all at once, a few days, in advance, with only one big mixing bowl to wash up. Excellent! 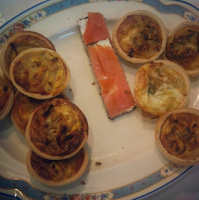 Flapjacks are also good, but look less impressive. I'd avoid biscuits; they need to be done the night before and for the time and fuss they take, they don't have nearly enough impact.

GETTING IT THERE AND SERVING
Charity shops are treasure troves. You can find really large platters and pretty cake stands for just a couple of pounds. If you're very organised – I wasn't – and having the party somewhere where you go every day, like an office or college, you might be able to take the crockery in a day or two early, so you only have to transport food on the day.

Roses and Quality Street tins hold a good amount of food and fit really well into the blue heavy duty shopping bags from Tesco. I managed a stack of three tins of food in each bag, with plates and cake stand shoved down the side.

The initial moment when people see everything is when it's most important to use nice things, so sandwich plates and cake stands are the priority items. Worry less about what people are eating off of (but do provide something). For our tea party, as portability was key, we used paper napkins and plastic cups. Paper and plastic are not as pretty as proper china, but I could carry (and afford) everything I needed. If there are several of you involved, see if other people can supply tableware: my workmate Cara brought along the most wonderful tablecloths, including one embroidered by her great grandmother. If you must have tea cups but you're doing the baking, see if someone else in the group can bring cups or everyone can bring their own.

It's easy to organise a tea party absolutely anywhere. Birthday tea party at work? Simple! Hen tea party on the beach? Piece of cake! Surprise tea party picnic for Mum? You can do it.