A hat that fits 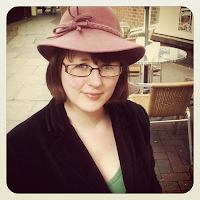 Being a bear of very little brain, I have a teeny head, which having flat shiny hair does nothing to pad out. It's not something I have a particular problem with, until it comes to hats. Modern hats are so large! The one-size-fits-all ones never fit me, and even M&S's small-to-medium size is too large. I don't know whether ladies in the past had smaller heads, but I do find it much easier to find vintage hats to fit or simply to make my own.

Being a fussy sod, I won't settle for any old hat, so I've spent ages trying to find one that's just right. Mr Robot spotted this one in Oxfam yesterday when we were doing our weekly butcher shop/ trawl through the charity shops. It fits! And it suits me (I think). This photo was taken just after I'd bought it, so I'm in Saturday slob mode, wearing a jersey top and no makeup, and it's not quite pulled on. I like the picture even so!

The hat is quite a good label: Frederick Fox, who carried the Royal Warrant and made hats for Diana, Princess of Wales as well as the Queen. Mine's got the Royal Warrant logo inside, so it has to date after 1974, but that aside I have no clue when it's from. I have a suspicion from the font on the label and the floppy-brimmed style that it's most likely from the 1970s – 1980s hats were much stiffer and more architectural – but it could be from five years ago for all I know. I like it, it fits, and for a fiver it would have been foolish to leave it... 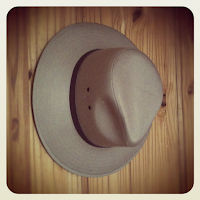 Mr Robot is also small of skull – we both have quite fine bones. It's easier to find hats that fit him, though, as men's hats seem to come in many more size options. He's wanted a summerweight hat for a while, so for his birthday this week one of the presents I gave him was this brown canvas fedora by Jaxon, bought from Village Hats. Bruce who blogs at Eclectic Ephemera recommended the firm, and I was very pleased with the speed of service, quality of hat and price overall.
Labels: 1970s accessories charity shopping shopping