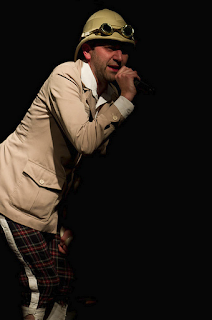 WARNING: Person who knows nothing about hip-hop attempting to review chap-hop!

Professor Elemental was the headline act at the ball at this year's Waltz on the Wye. Andy and Rachel, the organisers, got in a really good lineup last year, so while I wasn't sure what to expect of Professor Elemental, I was certain it would be entertaining. And it was! I don't know enough about urban music to know exactly what style the Professor performs in, but it seems like rapping over some very hooky repetitive tunes, and I really enjoyed his live show. Even more surprising, Mr Robot enjoyed the live show too, and he generally regards anything made after 1989, with the exception of Guns 'n' Roses albums and fruity girls, with utter horror.

We bought the two albums The Indifference Engine and More Tea? from Amazon after seeing the live show. (Here are the Professor Elemental albums.) We both love The Indifference Engine. It's got the same catchy tunes and comedic lyrics that we enjoyed so much at the ball, and the tracks include 'Splendid', 'Cup of Brown Joy' and his most famous one, 'Fighting Trousers'. The Professor is a steampunk explorer with an addiction to tea and battenberg, he has a monkey butler called Geoffrey and relates tales of his escapades in his songs, plus there are lovely little parodies and nudges at Victorian science fiction novels and cult SF films. The whole album follows this theme, and it feels consistent as a set of songs, while each one is distinct and enjoyable in its own right.

More Tea?... He says 'Herbal', I say 'No thanks', to misquote 'Cup of Brown Joy'. Musically, this is very different. To my ignorant ears it sounds closer to mainstream music, so while the lyrics are still very clever, we both found it much harder to get into. The 'Professor' character also isn't as consistent across all the tracks, which is a pity. More Tea? includes remixes of several of the more famous songs, and to be honest I vastly prefer the ones on The Indifference Engine. The only two tracks we really liked on this album were 'Animals', with Helen Arney, and 'Player Hater'. 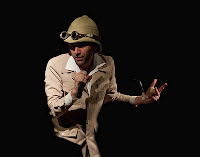 Mr Robot is a big fan of comedy music and made the observation that The Indifference Engine has a similar feel, in terms of being full of personality, to work by the Bonzo Dog Doo-Dah Band, and I could see what he meant once he said it. I'd definitely recommend seeing Professor Elemental live, and will be listening to The Indifference Engine lots on my iPod. We've also already managed to get one friend hooked as well! I probably won't listen to More Tea? very much, but if you're more au fait with urban music than I am (not difficult!), you might enjoy it.

See Professor Elemental 'Fighting Trousers' on YouTube. (The version from The Indifference Engine.)