Outfit post: what I wore to stalk a cricketer 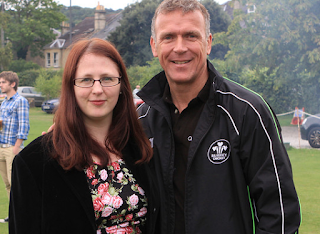 Mr Robot’s firm are based in two buildings in Bath, and yesterday they had a cricket match. As though the promise of FREE PIMMS (even better than the Cheltenham Cricket Festival where they sell it by the pint) weren’t good enough, one of the buildings brought in a ringer - former England player Alec Stewart. Crumpet ahoy!

I realised with the free drinks that my behaviour and language would probably grow less ladylike as the match went on, so tried at least to dress the part in my Heyday Fleur black roses wrap dress. I love this dress. It makes me feel pretty without actually revealing much. Up to my neck, down past my knees, and still gets more compliments than anything else I own. The nice heavy cotton also washes really well and doesn’t crease easily.

I’d recommend this dress to anyone whose figure is a bit out of proportion in any one area because the ties make it adjust to fit. Mr Robot kindly informed me that he thinks it makes my belly look big, but it doesn’t. I’m an ‘apple’ body type, and my belly looks big because I have a big belly; if you visit Heyday’s website you’ll see lots of more conventionally proportioned ladies wearing this style of dress and not looking as though they’re trying to shoplift a turkey.

I topped it off with fake pearl earrings, a black velvet jacket that a friend had grown out of, and cheapie black flats because I have a sprained ankle and it’s those or hiking boots for the next four to six weeks.

And then I went out to leer at cricketers...
Labels: clothing cricket crumpet outfit post