'The Killer in the Rain', Raymond Chandler [books] 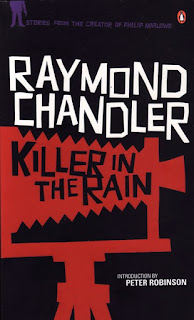 This is an interesting collection of stories from Chandler's days writing for the pulps. If you're not familiar with pulps, these were cheap magazines printed on low-grade wood pulp paper (hence the name). The covers were usually lurid, and they were most popular from the start of the 20th century up until about the 1950s – in other words, before television took hold of the public consciousness. Most were American, but we had a few here in the UK too. Amazing Stories and Weird Tales are probably the two you might have heard of. The characters are much more familiar. Tarzan, Buck Rogers, Doc Savage, The Shadow... all have their roots in the pulps.

Pulps are fast food literature, hot and tasty and probably not very good for you, sometimes awful, but every once in a while brilliant, when the trash you intend to consume is put together by a master.

The stories in Killer in the Rain were all published between 1935 and 1941, a tight timeframe, and weren't published again until after Chandler's death. The reason is that he revisited them for his novels, picking out a storyline here, a character there. 'Try the Girl', for example, forms a big chunk of Farewell My Lovely. Some of the other stories ended up in more than one novel. The character's name is never Marlowe, but you can see where Chandler's hardboiled private eye comes from. It's hard for me to say whether I really enjoyed the stories as half the time I found myself thinking of the novels they fed into, and Chandler's novels are superb. They're more curiosities for the Chandler completist than must-read gems. If you haven't read any Chandler, start with the novels. Save these for a rainy day – without a killer in it.

This book is currently in print and costs £8.99. I bought my copy from Mr B's Emporium of Reading Delights, Bath.
Labels: 1930s 1940s books crime pulp