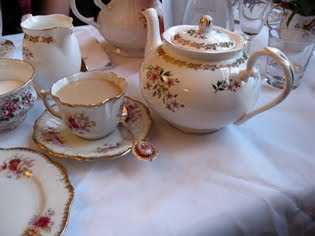 Yesterday I went to the first 'Secret Tea Party' hosted by Mrs Stokes in Bath. I signed up mainly because I'd wanted some help with my hair, which is a definite hairdon't right now, and there were going to be stylists there, but the opportunity to have tea and cake too was not to be passed up. I mentioned it at work and on Facebook, and a few friends liked the sound of it, so while I had planned to go alone, we ended up making a nice little group of four. 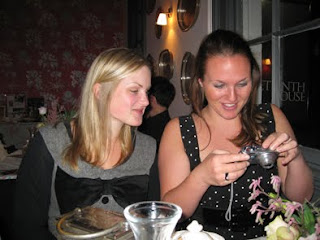 The event was held upstairs at The Nineteenth House in Bath. It's a sort-of-new pub; it used to be a specifically gay bar, and now it's not, so while it's been there for years I'd never been inside (because I believe in allowing people to have 'safe' spaces and didn't want to intrude, not because of prejudice). With silver trays on the walls and bold wallpaper it felt both modern and old fashioned - very suitable for an event like this. Catherine of Mrs Stokes had further decorated with vintage tablecloths and napkins and beautiful mismatched china on every table.

Jess, Lu, Andrea and I had a table to ourselves which was ace as it meant there was none of that awkward 'Will they all think I'm a terrible guts if I eat another sandwich' anxiety. If my friends had thought I was scoffing all the goodies, they'd have said something. We started with a glass of champagne each, but after that there was tea. 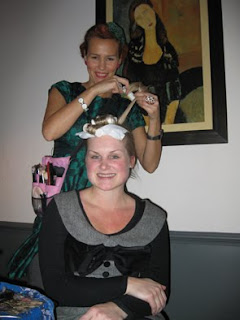 As we had tea, Gem Lye, burlesque dancer and founder of The House of Go Disco agency, demonstrated one way in which she does her hair. After that there were vintage makeovers. One of the stylists was Inma Azorin, who does the styling for some of our photoshoots at work, but I've forgotten the name of the other lady so if anyone remembers, please tell me in the comments! [EDIT: Her name was Lou (thanks Catherine!), and you can see the sterling job she did on my barnet at the bottom of the page.] There was also the opportunity to purchase china – if you're looking for a pretty gift Mrs Stokes' boxed giftsets are adorable. Only a surfeit of china at home kept me away from the 'Tulip' teaset!

The whole event was really lovely. The atmosphere was great, and there was a nice spread of ages too. I had feared being in a room full of gorgeous 20-somethings, but instead I was in a room full of gorgeous many-aged-somethings. Everyone had put in effort with their clothes, and after walking through Denim Hell (aka the new shopping centre) earlier in the day it was nice to see so much prettiness. 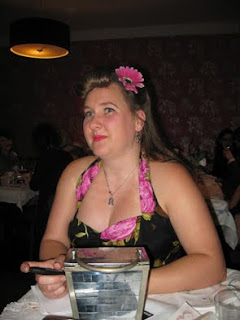 On my table Lu wore a black dress with white polka dots and a patent belt, Jess had a cute grey dress with a black velvet bow at the front over a long-sleeved black top, Andrea had a sarong dress from Vivien of Holloway (Inma found a flower to go in Andrea's hair that matched her dress perfectly) and I went 30s-style in a calf-length black and white herringbone skirt and my recently completed 1938 jumper, with a pearl and green enamel four-leafed clover brooch and pearl earrings to match.

I really think the tea party showed that this area has a hunger for pretty, vintage-feeling events. Catherine plans to host more tea parties, and there's a regular burlesque night which I believe Gem organises. World, the ladies are coming!

Photos are: Our table 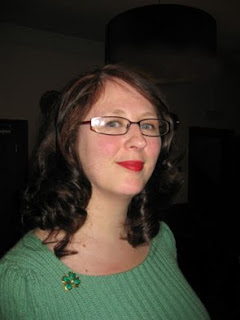 Jess (left) and Lu (right), pre-makeover
Jess during her makeover with Inma (I really wish I'd got one of her afterwards as she looked stunning.
Andrea, post-makeover
Me, looking smug because I've got curly hair that doesn't look 1970s for once!