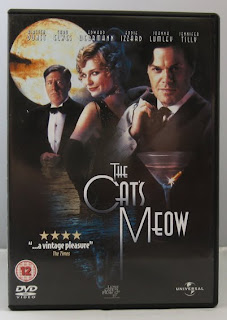 The Cat's Meow got a fairly poor reception on its release, but it's one of my favourite modern films. It's based on Hollywood fact and Hollywood legend. The fact is that newpaper magnate William Randolph Hearst took his mistress, the beautiful actress Marion Davies, plus a number of other Hollywood types including Charlie Chaplin and Louella Parsons, on a yacht trip. Guest of honour was Thomas Ince, a film producer, whose birthday it was. Ince was taken ill aboard, and died ashore the following day. The official story is that Ince died of a heart problem; Hollywood legend has several tales, one of which is that Marion Davies and Charlie Chaplin were having an affair and Hearst, in a fit of rage, shot Ince thinking he was Chaplin. There's a write-up as part of Ince's wikipedia entry. That's the story portrayed in The Cat's Meow.

The casting is fantastic. Kirsten Dunst's Marion is simultaneously flirtatious yet loving, a woman on the verge of having an affair while still feeling great affection for Hearst. Eddie Izzard's Chaplin is a charming rat. As Hearst, Edward Herrmann plays a powerful man, terrified of losing Marion despite all his power in other areas. At first there's a feeling of lighthearted fun, but things slowly become more serious, more frantic.

The costumes are almost all in black, white and silver; director Peter Bogdanovich wanted to film in black and white but the studio wanted colour so he turned to costume designer Caroline de Vivaise to help him create a more monochrome look.

Well worth watching if you find it - I bought my DVD from HMV.
Labels: 1920s film