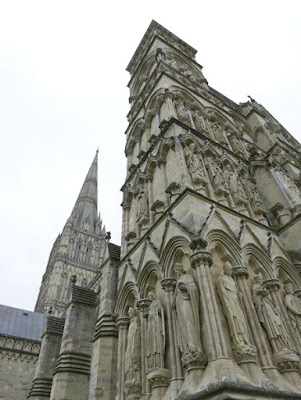 Mr Robot and I celebrate our 15th wedding anniversary this week. (We've been together for 22 years now.) Usually we go away on holiday when our anniversary rolls round, but the cattery was fully booked, so instead of going away for a week we decided to make do with one night somewhere nice.

This was a pretty big decision as the Urchins had never been left on their own, and we were terrified that if we left them alone for too long Ziggy might go wandering again as he did in May. Because of that, we picked somewhere fairly close, so we could get home easily: Salisbury.
We didn't plan to do lots of things while we were there, though Mr Robot was keen to get photos of the cathedral from across the water meadows, as Constable painted it. We arrived by train, and scouted out the area round the water meadows. It was really lovely. The meadows were designed to be flooded for good grass growth/grazing, and somehow they're still there - I'm honestly surprised some vandal developer hasn't planted new houses all over them. Maybe all the water poses too much of a flood risk, or perhaps Salisbury council values the beauty of the area. At any rate, on a sunny day it must be heavenly there. A moody sky would also have been something. Unfortunately we got a boring, flat grey sky. 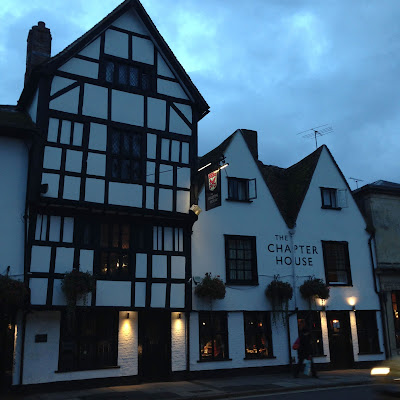 We walked all the way round and came back into the city from the other side. The place we stayed is The Chapter House, which has a steakhouse/grill downstairs and rooms upstairs. We got soooo lucky with our room. As you can see, the building is quite old, and ours was on the first floor (American: second floor) in the half-timbered bit. It was enormous, with wonderful wood panelling and a really comfy bed. 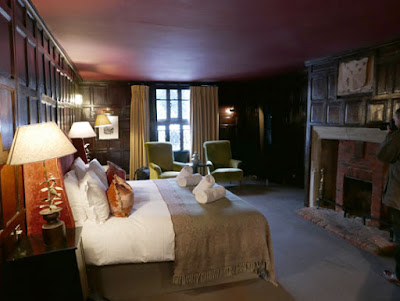 As well as the steakhouse, there are private dining rooms downstairs, all panelled walls and dark furniture, looking like something out of Poldark.

Salisbury itself feels very Poldarky, or perhaps very Hardy-y. Dorchester is the heart of Hardy country, but Salisbury still has that classic 'Wessex' feel. Buildings there date from the 12th century onwards, but there are plenty of Georgian ones too. It's one of those places where you don't need to use much imagination to visualise it as it must have been a hundred or two hundred years ago. The shops are a good mix of high street staples, plus there's a decent market in the town square. We grabbed some Thai street food for lunch at the market.

I dragged Mr Robot into the chazzas (where it was a good job we travelled by train or we might have come home with another dinner service) and to the little Antiques Centre. That had a lot of very nice-looking silverware, but as we'd never polish it there's no point us owning any silver. I also accompanied him to the pubs. Among the pubs we stopped at, we had a drink in the 12th-century Red Lion, which is a lovely building with a very pretty courtyard but the bar is very modern and unsatisfying, and another at the New Inn, which is very new indeed being from the 15th century...
The New Inn was our favourite pub of all those we visited, for several reasons. It was cosy inside, with leather seats and wooden beams and the smell of the log burner. It had a garden at the back from where you could see the cathedral tower. The range of beers was pleasing. And it had a most excellent pub cat, a fat bruiser of a tomcat called Poppy. Clearly he had become a muscly lump to overcome being given a girl's name. We liked Poppy lots. 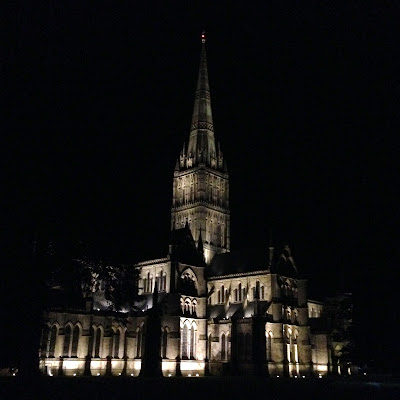 Last night we ate dinner in the Chapter House's steakhouse, and enjoyed it very much. After dinner we took a moonlight stroll round by the cathedral. It struck me that none of the cathedrals I've visited in Spain have grass round them, but most of those here in the West country have lawns around them. Our soggy climate has to have some advantages! The floodlighting really brought out the beauty of the architecture (Early English Gothic, apart from the tower and west front, which are Decorated Gothic, buildings fans.

After a night in our luxurious room, we could have spent more time in town, but were desperate to get home to the cats and make sure they still loved us. I think they still do. 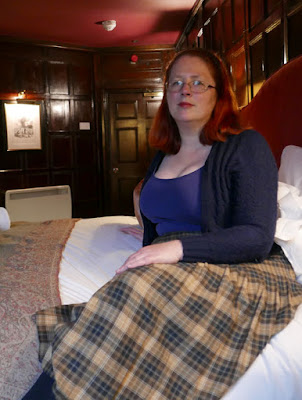 Outfit note for people who like that sort of thing: I wore one of my current favourite daytime outfits: pleated tartan skirt, me-made late 40s navy cardigan, blue vest top and navy tights, plus black penny loafers. (I ought to have brown brogues for this outfit.) Usually I'd button the cardigan up but it was too hot, so the world just had to see the vest top... Anyway, it was ideal for a day stamping round Salisbury and along the water meadows path.