Mama's got a brand-new bag 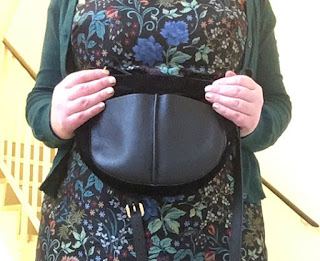 You know the feeling when you’re looking for a particular thing and can’t find it? In my case, for a few years now I’ve been looking for a small, neat, but crossbody zip-topped leather bag to replace one I own that’s getting sadly very tatty. Small and neat, because that’s how I like my bags. Zip-topped, crossbody and leather, because I want it for travelling. I find it’s easier to get money or cards out quickly and then re-fasten a zip-top bag than a bag with a flap, crossbody leaves my hands free for taking photos (and as I will be an obvious tourist, will make things difficult for bag snatchers), and having had my sunblock dissolve one vinyl faux leather handbag while on holiday, I’m sticking to leather.

Recently I found this one in Accessorize, and it is almost exactly what I’ve been looking for. Perhaps a little squashier than I was hoping for, but it's close enough. The two pockets in the front will do for things like train tickets and possibly my phone, while there’s a zip pocket inside where my work door card can go. (Nothing worse than having to rummage round for that while a queue of people builds up behind me.)


Having bought this, though, it has reminded me that I really need to get round to repairing some of my other bags. One is coming away from its frame – a quick dab of No More Nails should sort that – and another needs its handles replacing. The latter is black fake leather, and I’m not sure whether to make a black felted wool handle, or one from the robot-print canvas I’ve had stashed for years. I think I might experiment and see if it’s possible to create ones that are sturdy enough but attach with press studs, so I can have interchangeable handles. One to earmark for a future crafty Sunday project, I guess.

Thinking about my vintage bags, most of those fasten at the top with a clasp or kiss lock. Flaps? NO. 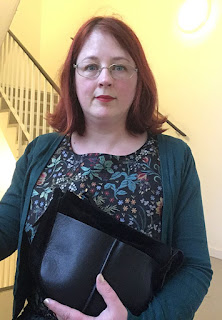 Having said I wanted a new bag for travelling, you might wonder where we’re off to next. We’re spending time at home in the first part of the year, but have booked a trip to Bordeaux in the autumn. Hopefully by then our government will have worked out what on earth they’re doing with regards to Brexit and will be able to tell us what insurance and visas we need, though given their display of incompetence so far that’s not guaranteed. I’ll probably take a lot of the usual clothing suspects with me, such as my poppy skirt, Seasalt dress and Heyday! Judy dress, but for the first time ever I’m also wondering whether to make a few things. It’s liberating being able to think of what I want rather than what the shops are selling, stepping outside trends and what the mainstream thinks is suitable for women my age or size.

On which note, I took the photos in the stairwell at work, and it occurred to me that you probably hadn't seen this dress before as I don't often show my modern clothes on this blog. I bought the jacquard dress from Monsoon in 2017 (in the sale) and I love it, but it is a bit baggy above the bust. That's because I have relatively narrow shoulders. Making my own clothes means I can avoid issues like that. (The cardigan cost about £2 in a charity shop. Any knitwear I don't make myself nowadays comes from chazzas.)

Do you find flappy bags a faff? Or is it just me? And if you have any advice on replacing bag handles, I'm all ears!
Labels: accessories charity shopping