Too Many Clients: A Nero Wolfe Mystery 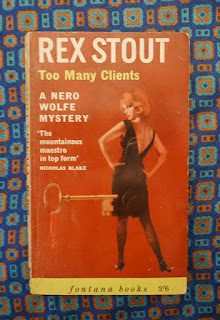 People didn't discover sex in the 60s, but they sure did make more of a fuss about it. 'Racy' is a good word, suggestive of speed; it was a fast decade, and it was a sexier one. Did the contraceptive pill and the push for women's equality have anything to do with it? Possibly. I'd say the crime novels of the decade are racier than earlier ones too, though the gunplay and fisticuffs could have as much to do with the influence of noir as anything.

All of which is a roundabout way of saying: this book is far from your classic 'cosy'. It's a crime novel that could only really have come from the 60s. A decade earlier and it would have contained too much sex; within a decade the attitudes would seem prudish. How fast things moved in the third quarter of the 20th century!


I'm not familiar with the detective Nero Wolfe, though he's one of the great American detective characters. He was created in 1934, and this novel was first published in 1960, by which time the character was well-established. I have to say, I didn't particularly like him as a character. In this story, Wolfe's assistant, Archie, is hired to follow a man who calls himself Thomas Yeager. Thomas Yeager is then found dead... but it's not the man who hired Archie. Wolfe's reluctant to get involved, and it's Archie who does all the legwork, uncovering what can only be described as the real Yeager's shag pad, discovering his various paramours, and basically digging up almost all the clues Wolfe uses to work out who killed Yeager. Wolfe spends the novel at home fussing about with his orchids and eating slap-up dinners.

My main problem with this book is the treatment of the female characters. The authorial point of view is always the male one and so it's the women who are always described in terms of their attractiveness. Yeager's no great god, and Wolfe is definitely no answer to a maiden's prayer, but that's irrelevant, whereas for the female characters their looks are the only really important thing about them. No-one questions the fact that Yeager expected his secretary to show up at his red-silk-upholstered flat for work. I'm used to Attitudes Of Their Time in crime novels, and this one definitely made me glad things have progressed for women.

I'd probably give other Nero Wolfe novels a go if they fell in my lap, but this one didn't leave me keen to go out of my way to seek them out. Wolfe himself wasn't likeable, and the female characters weren't written with any sort of respect for them as people. It seems a bit daft to create characters whose value is mostly in their appearance in a novel where they can't actually be seen. The mystery was interesting, but not enough to make up for a book populated mainly by people you don't want to spend time with.
Labels: 1960s books crime