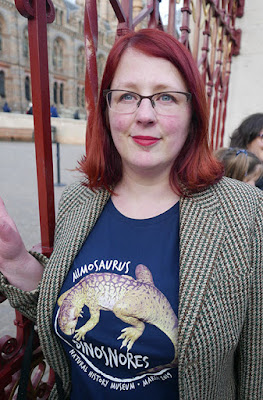 Mr Robot bought us tickets to Dinosnores For Grownups at the Natural History Museum in London, and our sleepover was last night.

We arrived in London early and pottered round Chinatown and Soho, then crossed to South Kensington on the Tube, which was heaving because of the anti-Brexit march. (We had camping gear with us, and couldn't risk getting kettled and missing Dinosnores, so we didn't go near the march.)

Because we were carrying stuff, and I'd need to dress in the same things today as yesterday, I went for the practical option: the Dinosnores T-shirt Mr Robot got me (of course!), my brown herringbone trousers, my vintage Dunn and Co tweed jacket, and hiking boots. Possibly a bit macho; I joked to Mr Robot that as he was also in tweed jacket and brown trousers we were in his and hers outfits, and he said they were more like his and his outfits! Anyway, looking at the photo he took of me as we waited to be allowed in, I don't think I look too blokey. Red lipstick and a good blow-dry triumphs. 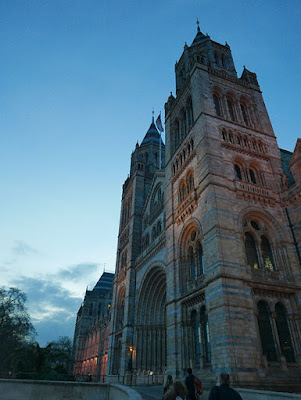 The Natural History Museum is one of my favourite buildings. Possibly it's rivalled by the Plaza de Espana in Seville, though the museum wins on detail. Everywhere you look there's something to see, whether it's a giant sabretooth tiger on the roof, or a teeny mouse face carved at the bottom of a column. We had to wait a while to be let in, and as dusk fell watching the light shift across the statues and carvings was wonderful. We arrived about half an hour early as the day's visitors were still leaving, which makes the turnaround between getting people out and getting ready for the event really impressive – in fact, I can't fault any aspect of the staffing at all. 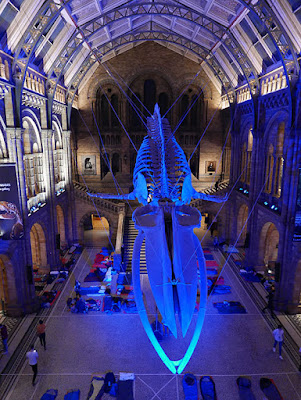 When we got in we were given a lanyard with a schedule for the evening's events, a drink token, and a sleeping mat. We made sure we arrived early as I was determined to bag a place in one of the little side-rooms off the main hall (and we got lucky). When Dippy was replaced with the blue whale skeleton in the main hall I was originally a little upset, but by night, all illuminated with blue light, it's an amazing sight, and Mr Robot and I couldn't get enough of looking at it and photographing it. 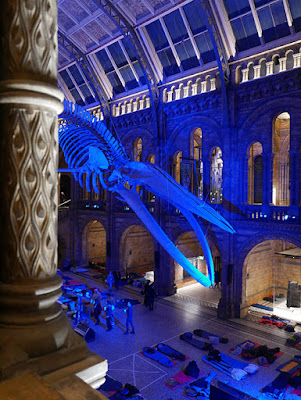 After we settled in we got a drink, then went for the meal. I have to say, the food was a big disappointment. I realise mass catering is tough, but this was below average even for mass catering. (Mr Robot regularly has to go to large events for work, and he says he'll never criticise the catering at those again.) But we washed it down with a (bought) bottle of wine, which loosened us up nicely. 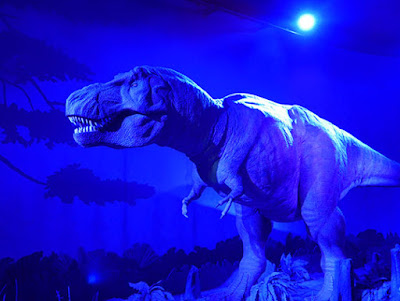 After dinner we went to explore. First we wandered round taking photos of the whale skeleton, then went through the big dinosaur display. The Natural History Museum is free to enter, and kids love dinosaurs, so that part of the museum is always busy. But not at Dinosnores! We were alone with the giant animatronic T-Rex (which is really well done; if you follow me on Instagram I put up a little video of myself arsing around in front of the dino models), and could look at all the skeletons and information boards together at our own pace, without feeling the need to hurry along. It was smashing having time to consider the sizes of dinosaurs, and their behaviour. In the semi-darkness it was a fantastic experience. It was my favourite part of the whole night. And I have concluded that as cool as dinosaurs are, a real one, even a little herbivore, WOULD ACTUALLY BE HECKING SCARY. 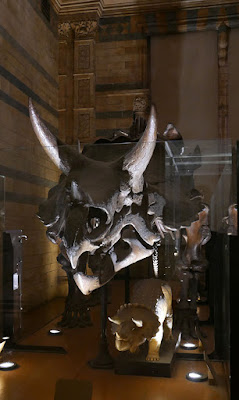 There were various activities going on through the night. There was a pub quiz in the cafe area, which we listened in on but didn't take part in. There was gin tasting on the way to the dinosaur exhibit – only a couple of flavours of gin – which we definitely did.

Another odd thing that we sampled was edible insects in the creepy-crawly room. Normally I'd never try something like that, but something about the setting (or possibly the half-a-bottle of wine with dinner, then gin) made me decide to give it a go. Mr Robot tried all four of the offerings, but the first and last both had 'worm' in the name and... nah. The thought of squishy worminess put me off. I just tried crickets and termites. They weren't bad. They wouldn't be too awful mixed in with museli, I guess, or flapjack – something which had itself got a bit of texture. That way you wouldn't constantly be wondering about the crunchy bits. 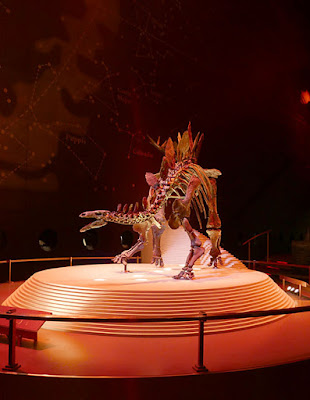 There were also monster movies on show, though those didn't start till midnight and we were knackered by that point. I did drag poor Mr Robot in for the first bit as they were showing Jurassic Park, and I just wanted to get as far as seeing the dinosaurs in the park. After that we left, though, partly because of tiredness and partly because I didn't want to make the poor chap suffer any longer. He really doesn't like Jurassic Park! (But hey, it could have been Sharknado. The 1950s B-movies I'd expected weren't on the cards.) We browsed through a room full of geological exhibits (and an amazing stegosaurus) on the way back, and arrived at our sleeping mats to catch the end of the harpist playing in the main hall. 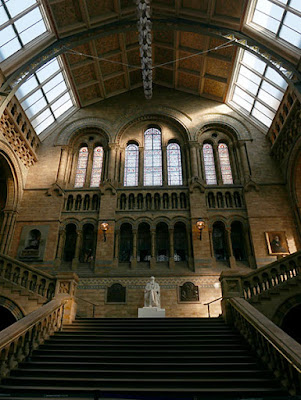 And so this morning, after a decent-sized fry up, we headed west again, to proper comfy beds and our cats. Light was flooding the main hall. It looks beautiful by day, but so much better by night. I'm really glad we got to go. This was an excellent present!
Labels: events London museum Victoriana