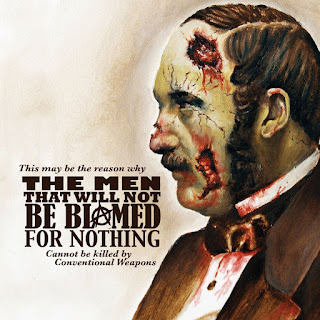 What’s this? A steampunk review? It’s been a while since I’ve covered much steampunky, hasn’t it? (Okay, my blog content’s been adrift for a while. Sorry.) I’ve really been missing steampunk from my life recently. I think the change in magazines at work has been good for me mentally; I feel like I have more energy and willpower to do things. Making sure I take time to make things on Sundays also helps, and making things always makes me feel closer to my steamy pals, most of whom I only see online most of the time. Steampunks are mind-bogglingly creative, in my experience.


Straight off, I can tell you that this probably won’t appeal to 99% of the people who read my blog. It definitely puts the punk in steampunk. It’s raucous and shouty. If you’ve ever had the notion that steampunk is all white people acting genteel and ignoring the awfulness of Victorian history, this will blow it away. It’s the music of the factory worker and the working-class soldier who realises he’s got more in common with the people he’s fighting overseas than the posh officer issuing orders. ‘Doing It For The Whigs’ is a Victorian-set rant about Tories that you suspect has more than a little relevance today.

That’s not to say the songs aren’t without humour – ‘Free Spirit’ is about a lewd lady whose licentiousness cannot be stopped by death, 'Victoria's Secret' is about a zombie Prince Albert, and ‘Margate Fhtagn’ tells the tale of a workers’ seaside jolly that gets disrupted by the appearance of the Elder God Cthulhu. There’s quite a lot of rudeness here too. You have been warned.

So if you’re part of the 1% that does like a bit of shouty punk mayhem and don’t mind a bit of lewdness, I recommend this one.
Labels: Music ooh la la steampunk