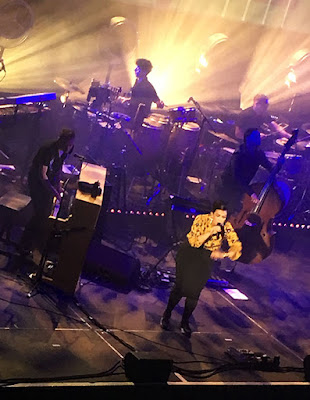 Yes, I'm back! Did you miss me? (Don't answer that…) It's been a funny few weeks, and one of my magazines has been closed which made me pretty sad. When you create things, it's hard to accept they're not a commercial success, but people simply don't buy as many mags nowadays and I can see the business side of the argument. But last night Mr Robot took me to see Caro Emerald in concert in Bath, and that would cheer anyone up.


The venue was the beautiful old Forum cinema, which I've mentioned loads of times as not only is it one of Bath's few bits of art deco architecture, it's a great venue. Usually we sit in the stalls; this time we were right at the front of the circle, off to one side, and annoyingly there was a metal guard rail right in our line of sight. Still, with a bit of careful positioning I was able to see Caro under or around it.

It was great to see at least several of the musicians who were with Caro Emerald in Cardiff last year playing alongside her this time too. I'm not great at recognising people, but there can't be that many mohawk-sporting chaps who excel on both the saxophone and clarinet and guitar. Or if there is more than one, Caro's got 'em both. Mr Robot also reckoned her main guitarist was with her last year; he recognised the man's dancing. 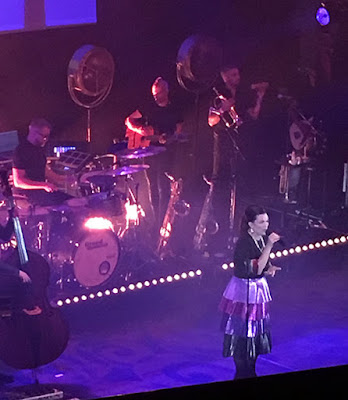 Surprisingly there wasn't much in the way of new material at this concert. (Unless you count the Caro Emerald souvenir tea towel - YES, TEA TOWEL - Mr Robot bought me.) I love Caro's stuff, and it meant we got to hear a lot of old favourites, Pack Up The Louie aside, but I'd been hoping for a new album. Greedy, huh? That voice is so good, you can't help wanting to hear more! I can't remember the title of one new one she did perform, but it reminded me a lot of Riviera Life. A lot of the backdrop was graphics in the style of the Mad Men opening credits, but with a tropical/beachy feel. I can get on board with that midcentury tropical vibe, definitely.

Only one thing spoiled the concert, and that was the trio of idiots who thought it was a good idea to come and stand right in my line of sight for the last half-dozen songs. Given we were right at the edge of the room, the angle probably meant they blocked a fair few people's view. That guard rail had been bad enough! If this had been a standing gig I'd have expected people to move in front of me, but it's a really crummy thing to do at a seated one, I think. If they'd shown even the slightest concern about ruining things for other people I'd have been terribly British and told them it was okay and then lived with it. They didn't, so I told them as they were leaving that they had spoiled things. They looked pretty shocked. I feel a little bit bad for possibly bringing them down, but perhaps they'll think twice before doing the same to someone else in future. 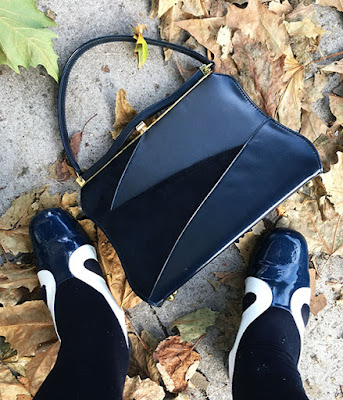 I wore my me-made 60s top (yes, actually getting some use out of that blighter, though I think I need to refine the pattern a little more as the armholes still aren't perfect), navy miniskirt and Modshoes slingbacks, and carried my Goody bag. On reflection I don't think the navy tights really worked with the shoes, though they did work with the skirt, so the lesson there is: buy more shoes. 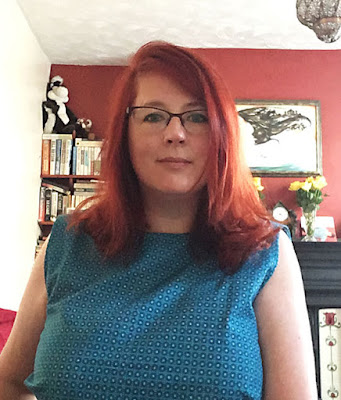 I also did my hair properly - blow dried with root booster and mousse on the ends to keep the flicks in. It's turned out pleasingly Diana Rigg, I reckon. It's all stayed in nicely and still looks good today, so I really should make the effort more often. Maybe I'll work it into my Sunday post-gym routine.

I hope you've been well. I've been checking on your blogs, and hopefully won't wait so long before posting again. S'pose I'd better dig up some more spooky stuff for you before October ends...
Labels: Bath events Music