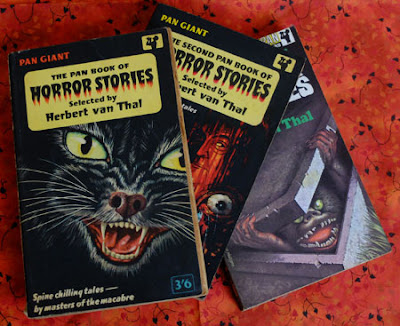 Here's one to delight anyone who likes something spooky at this time of year (and if you don't, October is really not the month to be reading this blog because I love it): all next week – from Monday 29 October – BBC Radio 4 is going to be broadcasting stories from The Second Pan Book Of Horror Stories in its 15-Minute Drama slot at 10:45 am, repeated 7:45pm. There's also an omnibus of all five on Radio 4 Extra the following Saturday at 1pm.


While the later volumes of the Pan Book Of Horror Stories weren't always of the highest quality, the early ones were brilliant. The adaptations include a couple of absolute classics, Edgar Allan Poe's 'The Black Cat' and Bram Stoker's 'The Judge's House'. Mr Robot and I have most of them stashed away at home.

Talking Pictures TV, meanwhile, is really pulling out the stops with its 'Mildly Terrifying [surely an oxymoron?] Wednesday', kicking off with Ghosts on the Loose starring Bela Lugosi and Ava Gardner, moving through the likes of Old Mother Riley Meets the Vampire and Monster from Green Hell, and carrying on into the early hours of the following morning.