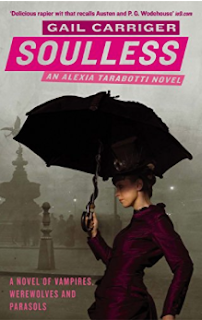 I'd heard about Gail Carriger's 'Parasol Protectorate' quintet ages ago – it's one of the more highly-regarded steampunk series – but didn't get around to reading it till my trip to India. All that time on longhaul flights and trains meant plenty of opportunity to read, however, and I got through all five: Soulless, Changeless, Blameless, Heartless, and Timeless.

The novels are set in an alternate Victorian era, mostly in London, and follow Alexia Tarabotti, a young woman unfortunate enough to have been born without a soul. Her touch can turn werewolves and vampires mortal, and as she's soulless she's incredibly practical, lacking in imagination and able to tackle problems head-on. As she ends up passionately in love with a supernatural being, there are plenty of problems to be tackled.


I'm not usually a fan of steampunk fiction when it involves the supernatural. For me the best thing about the genre is the way it can explore alternate histories, looking at how just one change in technology could have revolutionised an era. However, Carriger's blend of romance and adventure was very enjoyable to me. I think these are quite feminist books: there are a lot of female characters, and the variety of women's experiences, and the solidity of real friendship between women, are celebrated as much as happy, healthy relationships. Even as Alexia's uncovering murder plots and untangling supernatural scheming, there's a warmth to the stories. And it's not just Alexia's life that develops; her friends marry, have children, form relationships. All the characters feel pleasingly solid.

There were a few little things that annoyed me, such as misuse of the term 'high tea' where 'afternoon tea' would have been appropriate (MIM BUGBEAR KLAXON!) and characters referring to standing on the 'stoop' – I'm still not entirely sure what that actually is, though I think it might be a top step, but the writer's American so I will have to live with her English characters using Americanisms from time to time. After all, I don't complain when I read a novel set in Germany and all the dialogue's in English, eh?

If you enjoy a bit of steampunk and like a good dollop of romance in your novels, this is a fun series. Not one you'll go back to again and again, but solid fun when you read it.
Labels: books steampunk