Caves, more caves, and a fort 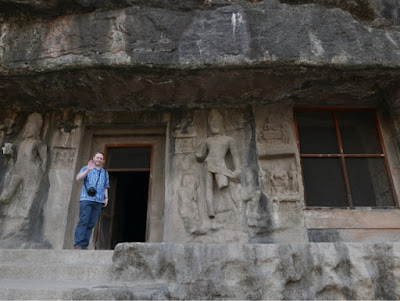 I hope you like caves, because the reason I'm in Aurangabad right now is to see the Ellora and Ajanta caves. 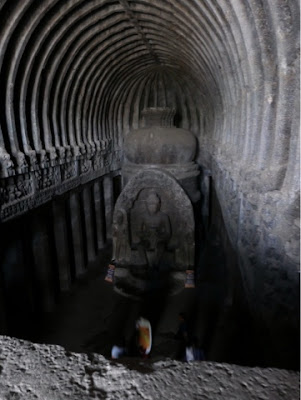 We visited the Ellora caves on the 3rd of March. We booked a driver for this part of our holiday as the caves are so far away; to be honest I booked him for two days but on hearing we were here for four he made plans for the other two days, and having seen how much less 'walkable' Aurangabad is than Kolkata I'm just going along with it. 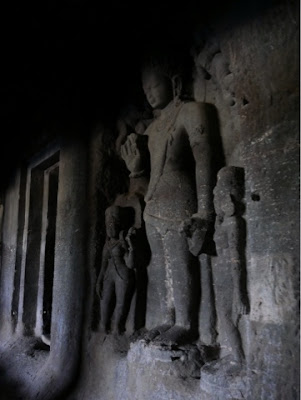 Ellora is about half an hour from Aurangabad. The caves are a UNESCO world heritage site. They're not natural caves - working from the top down, people carved the 34 caves from the rock. The first 12 are Buddhist (600-700AD), the next 17 are Hindu (700-800AD), and the final five are Jain (800-1000AD). We didn't manage to see them all because of a rock fall - we could've got a shuttle bus from the entrance to the final caves, but after walking all the way from cave 1 to cave 28, exploring as we went, then back to 16 (nearest the entrance) we were simply too hot and tired. 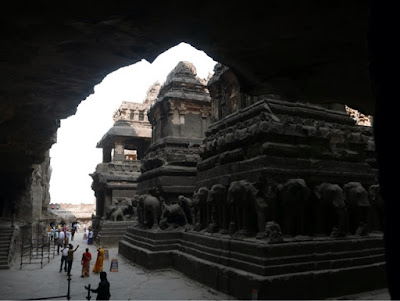 Anyhow we did see all the Buddhist ones - my trip to Burma/Myanmar has made me fond of Buddhism, somehow - and almost all the Hindu caves, including the incredible cave 16. The Kailasanatha Temple was busy, justifiably so, because it's so large and beautiful. It's the largest monolithic sculpture in the world. 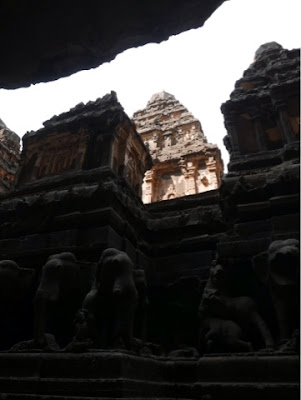 See these buildings? Not built up, but carved from the rock down! 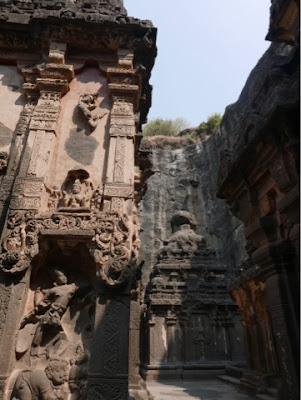 Like some of the other caves it is still a holy place so you have to remove your shoes there. 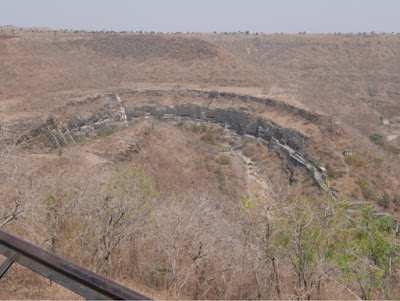 Yesterday, the 4th, we went for a two-hour drive to another set of carved-out caves, the purely Buddhist ones at Ajanta. We started from a viewing point, then walked all the way down to the caves - they're that semicircle in the landscape. In the wetter months this whole area is lushly green, and there are waterfalls at the left side of the curve. 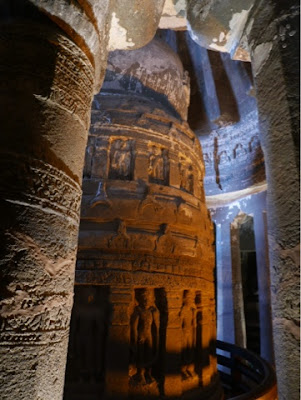 Some of the caves still have 1500-year-old paintings on the walls. To protect them, those caves have dehumidifiers installed, and very low light, so they're hard to photograph. Obviously flash is absolutely forbidden. 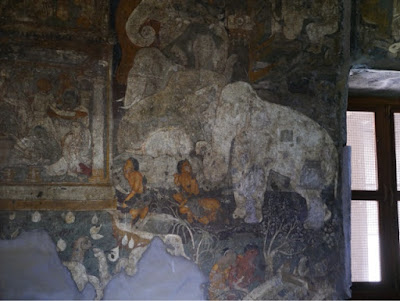 I preferred Ajanta to Ellora, though I'm not sure why - perhaps it was because the initial view was so striking, and the semicircular sweep so perfect. 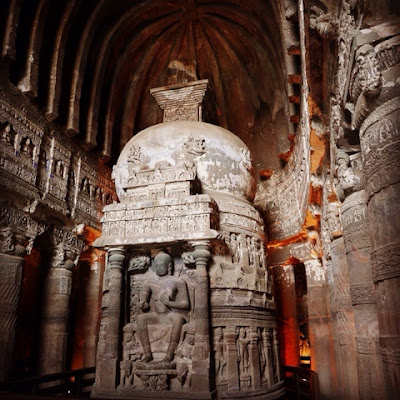 This time we saw all the caves. 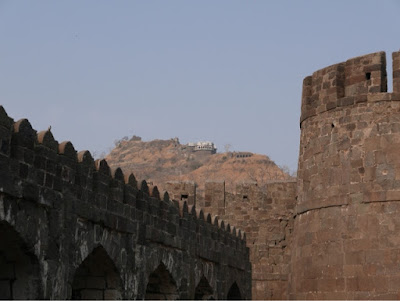 And this morning we went to Daulatabad Fort. See that bit of the fort on the hilltop? We climbed ALL THE WAY UP. 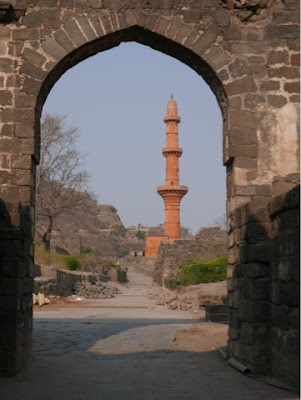 And we had to cross a very deep chasm with a moat at the bottom, and go through a tunnel filled with bats, and climb 750 steps to get there. You can call me Doctor Jones... 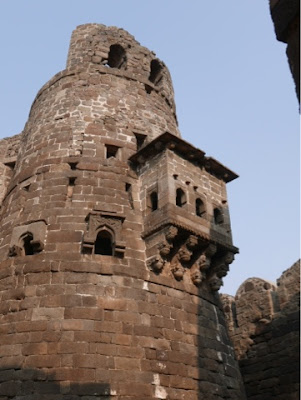 If I don't come home half a stone lighter after all this walking, and only eating once most days because of the heat, I will be very surprised.

Tomorrow Mr Khan the driver is taking us on a city tour, and the day after we fly to Mumbai (we'd booked trains, but decided rather than spend eight hours on another one, we'd get the plane instead). So I'll probably waffle at you some more from the home of Bollywood in a few days.
Labels: India travel