New makeup for me - and for Agent Carter 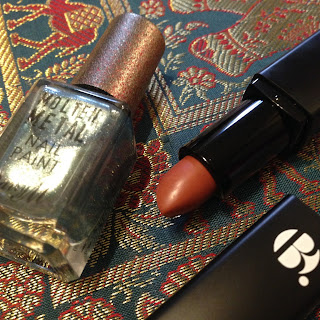 Today I bought some new makeup at lunchtime. I feel slightly bad about it because I promised myself I’d use up some of the makeup I have, not buy more. But it was that or buy a doughnut, and I’m trying to watch what I eat (don’t know why, nothing I do seems to make me any less rotund), so on balance I’d probably have felt worse about the doughnut than I did about one new lippie and a new nail varnish. Then I got back to the office and discovered Besame’s Agent Carter collection has started shipping! Agent Carter was one of my favourite television programmes in recent years - female-led late 1940s-set Marvel? Bring it on - and I was gutted when it got cancelled. I guess the Besame collaboration shows people still think fondly of the series, even if the networks didn't.


My makeup has toned down as I’ve grown older, and on the whole I’m fine with that – it’s been a natural evolution – but shopping for lipstick did make me wonder if my natural dislike of standing out too much has crossed over into ridiculous timidity. ‘What if a colour doesn’t suit me?’ Don’t wear it then. ‘I keep seeing photos of myself where my lips look wonky, perhaps I shouldn’t wear dark colours any more.’ Learn to apply it better, then. The red-brown I bought today is hardly startling, yet still I wondered if it wasn’t a bit too much. In fact, it all felt like too much instead of, at worst, the waste of a fiver on some harmless face paint*. I had to remind myself that it’s okay to try to look good, even if the attempt results in failure – better than never trying at all, eh?

And so I’m going to play with my makeup for a week or two, with painted nails and different lipsticks. I'm prepared to wear all sorts of colours on my nails that I'll never let near my face. Maybe I'll even DO SOMETHING WITH MY HAIR. (Hey, though, let’s not get hasty here...)

I shall keep my eye on the Besame site. Someone I follow on Instagram has the set of Agent Carter lipsticks. There were three in the Stark Industries box, labelled 102 Sweet Dreams, 103 Forget Me Not and 104 Always Be True. The colours look nice, typical Besame (rich and saturated), though people say they’re the same as others in the Besame range rather than anything new, just in different packaging. They don’t look like the shades I own, though, and perhaps if I had those strong colours, I'd convince myself to put them on my face instead of trying to fade into the background.

*As it happens, the red-brown is a bit too muted for my face, and looks a tad muddy, but I reckon mixing in a dot of one of the many bright reds I own but am too scared to wear will sort things out. In case you're wondering about the brand, it's B., a vegan brand from Superdrug.
Labels: shopping