We've arrived in Aurangabad after a mammoth train journey from Kolkata - about 36 hours from one hotel to the other. So I thought I'd blog a little about Kolkata.

Before we left, everyone told us Kolkata was a 'pretty hardcore' place to go. However, while there was some initial culture shock we felt quite at home by the time we left. Yes, it's noisy, and it is dusty, but there are lots of trees about, everyone is welcoming, and I always felt safe. Getting used to the traffic and the street stalls crowding the pavements took us a day or two, but once we'd got used to the hooting horns and packed crowds, all was fine.

For two days we'd booked walks with Heritage Walk Calcutta. The team are all historians and archaeologists, and do a lot of work showing the city's built heritage to schoolchildren and other local groups as well as tourists. I hope they're successful in their efforts to raise awareness of the city's beautiful old buildings. The day we left the second-oldest hotel in the city was demolished, having been allowed to decay to such a point demolition was permitted. An important folk art museum in Kolkata is also now at risk of closure (there's a petition on change.org asking the regional government to keep it open here) so clearly Tathagata and the team's work is needed and important.

Pritha, who showed us round on behalf of Heritage Walk Kolkata, took us to many fascinating places. The old Post Office at the top of this post is on the site of the original Fort William (and my great-great grandfather was a clerk there). If you read my previous post on Eliza, the next photo is of the church her husband helped raise money to build, where she was married, and also where her daughter from whom I'm descended was married. 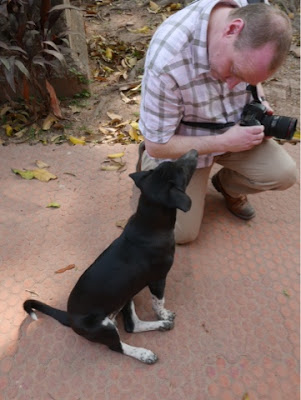 We visited Park Street Cemetary. No rellies there, though Pete did make friends with the resident dog. I'm glad he didn't let it lick him as the manky beast found a dead crow and tucked in with glee... 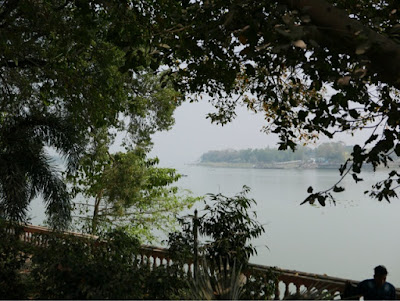 On our second day with Pritha we went to Chandernagore and Serampore. Alas! Eliza's grave was unlocatable, and her memorial was not in the church. (From the holes in the church walls it looked as though all the memorials had been removed.) But Chandernagore was lovely, with great views from the old buildings to the river. I really enjoyed that day.

We'd really warmed to Kolkata by the time we left. We loved eating hot kati rolls from Hot Kati Roll on Park Street, and while famous backpacker hotel The Fairlawn no longer serves beer (boo!) we were able to get a drink or three at The Lindsay's ninth-floor rooftop bar. We even bought some amazing handloomed silk, so I'll be firing up my sewing machine to turn that into cushion covers when we get home.

But we couldn't stay: the sleeper train to Aurangabad beckoned... 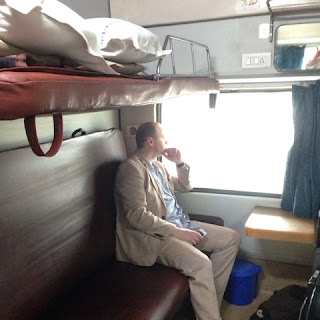