More than a feeling... 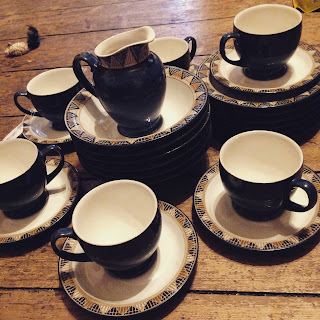 Boston! Boston Spa, to be precise. That's the pattern of these plates. Back in June 2015 Mr Robot and I found a set of six dinner plates in a chazza, and were very pleased with our bargain. This weekend I found myself unexpectedly getting this little lot to go with it, thereby proving Vix's maxim that if you wait long enough, everything turns up in a charity shop.

How do you unexpectedly buy six cups and saucers, six tea plates, six bowls and a jug? Well, I was supposed to be going to work because of DEADLINE HELL. The plan was I'd go in, do a few hours extra in the office - we don't work Saturdays, but the building is open for people who need to go in - and then do a spot of Christmas shopping. On my way to the station I popped into the local hospice clearance chazza. All the stuff that doesn't sell in the regular shops within a certain time ends up there there. The chances of finding vintage clothes is pretty much nonexistent, but it can be a good source of basics. I nabbed myself a couple of long-sleeved T-shirts (one Seasalt organic cotton, one M&S) and a wool brocade skirt (Phase 8) for £6 so felt pretty chuffed, and spotted the china in a cabinet.

This is where the story should end. But the Christmas Market is on in Bath, and I couldn't get on FOUR TRAINS IN A ROW because of overcrowding. People were literally pressed right up to the doors. This wasn't good, and didn't bode well for getting home again either, so I decided Fate didn't want me to go to work, and went home to fire up the PlayStation and bash some monsters to relieve some stress. And I told Mr Robot about the pottery, and he said we should go and take a look. You know what that means: we were going to get it. So we did. I'm dead chuffed; putting it all together we've now got six place settings (and a jug) for less than £25. 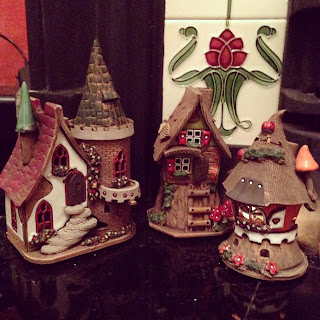 That's not the only thing I've bought lately. I added another Christmas house to my collection. Yeah, they're twee, but I like them. There's a stall that sells them at the Christmas market. They had one that was all half-timbered in style, a copy of a real house in Chester, but I stuck to my 'pointy fairytale houses' theme.

And in case you're wondering about deadlines, Mag One went yesterday, on time (hoorah!) and Mag Two goes tomorrow, and it will go on time, oh yes. 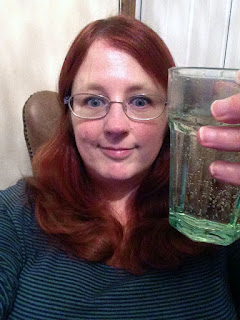