Your Christmas viewing and listening 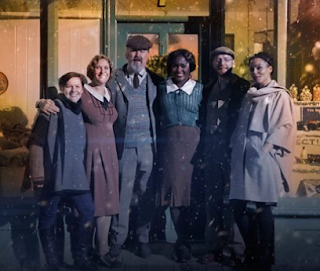 It's looking like a thin Christmas for telly as far as vintage lovers are concerned! So get your vintage fix in early, as BBC2 has a couple of treats for us this week. On 15 December - this Friday - there's The Sweet Makers at Christmas, where the confectioners explore Christmas sweets enjoyed by the Georgians, Victorians and people of the 1920s. The following night it's showing Feud: Bette and Joan, about the two superstars' career revival and intense rivalry in the 1960s from 16 December.

Over Christmas itself most programmes appear to be either modern, or set much earlier than the 20th century. The BBC's flagship period drama is Little Women, while ITV is highlighting Victoria. Here's my pick of 20th century things to entertain you while you're digesting your turkey.

If I spot anything else interesting, I'll update this page.


BBC television
1950s detective Father Brown returns with a Christmas special. Solving crime has to be juggled with the village pantomime by the kindly priest. (BBC1, 18 December, 1:45)

Ballerina Darcey Bussell is doing a documentary, Looking For Fred Astaire. In it she traces Astaire's career and how he developed his dancing skills. (BBC1, 21 December, 10:45pm)

If you prefer your dancing with more of a disco beat, Bruno Tonioli will be doing a show celebrating the 40th anniversary of Saturday Night Fever on BBC2, 22 December, 9pm. It sounds like the story of how the film came to be made will be fascinating. (Argh, and now I'm getting flashbacks to a karaoke night with my workmates - Ben the Reviews Ed's falsetto is the stuff of legend.)

Not enough white suits for you? Rebirth of the King will tell the story of Elvis' Las Vegas years. (BBC4, 29 December, 10pm)

BBC Radio
On Radio 3, Clare Teal will be teaming up with BBC National Orchestra and Chorus of Wales for an evening of traditional tunes and jazz. On Radio 4, Christine McVie - from Fleetwood Mac - will be choosing her Desert Island Discs. I always find the stories of 70s rock bands fascinating, and Fleetwood Mac in particular. David Attenborough's also looking back, reading from his memoirs Adventures of a Young Naturalist.

ITV channels
With no Agatha Christie from the BBC, ITV ensures lovers of vintage crime won't go wanting - Maigret In Montmartre is showing on 24 December at 8:30pm. Sadly that's about it for ITV1. 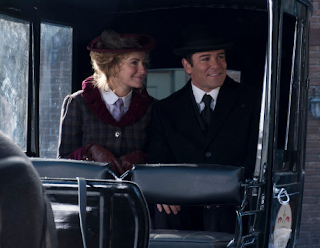 This year's Murdoch Mysteries Christmas Special is on Alibi on 21 December, 8pm. I have a soft spot for the Edwardian mystery series; it's cheerfully anachronistic, slightly steampunk, and perhaps it's not high quality but it's enjoyable. (Season 11 begins on Alibi in January.) Alibi's also showing the excellent Joan Hickson Miss Marples again on 22-24 December, and 25-27 December is pretty much all Father Brown, all day.

Yesterday is going heavy on the 60s music on 24 December - mostly episodes of Top Of The Pops 2 - and serving up mainly 80s sounds on the 25 December, though there's a big slab of mid-60s to mid-70s at midday.

Gold's got a lot of Morecambe and Wise in the run up to Christmas day. Drama is showing a truly terrifying amount of Call the Midwife - an episode every day.

Thank goodness for Talking Pictures! The channel can be relied upon for vintage films all the time, but they're interspersed with fascinating festive newsreels and public information films over Christmas. Those should be both fascinating and novel.
Labels: Christmas television