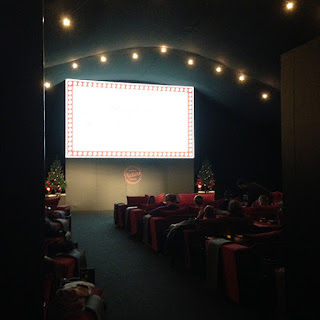 Hello again! I hope you're having a super pre-Christmas week. All my shopping's done, and we're polishing things off at work, so it's feeling pretty mellow at the House of Robots.

Do you count Die Hard as a Christmas film? Some people do, some don't. I don't exactly, but as it's set at Christmas it is vaguely appropriate to watch it at this time of year. Anyway, Mr Robot saw the Gourmet Picture Company was doing some showings in Bath, and as Casablanca was on the night of our office parties, and It's A Wonderful Life is on a day when the trains are borked* he booked us tickets to see Die Hard. Basically, we went, we sat on really comfy sofas in a big tent, and had a meal brought to us while we watched. The menus are devised by two big-name British chefs, Tom Kerridge and Rick Stein; Die Hard had a Stein menu of prawn cocktail (but a really good one, nodding at your 70s aspirational dinner party rather than your soggy 21st century sarnie al desko), fish curry with rice, and then ice cream - and the banana ice cream I had was fantastic. Because we're heathens we washed our fishy meal down with red wine.
It was quote strange seeing a familiar film on the big screen. You see bits of it in a completely new way; I'd never really been struck by how impressively 80s that sunset at the beginning is. And we definitely winced at some of the injuries in a way we don't when we watch the film on telly. Yippee-ki-OUCH, muddyfunster...

We had a few pints beforehand in a pub we used to drink in when we first came to Bath. The internal structure's completely changed, but it's still a really nice place for a beer - if you're in the city, I recommend The New Inn. 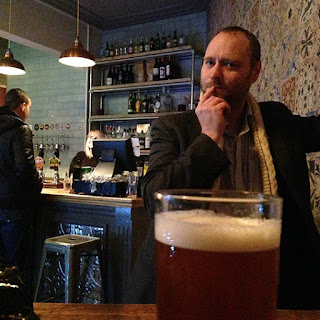 I didn't really enjoy the work party this year. Actually, that's an understatement; it was held in one of the local bars and it seemed rather understaffed. I queued for half an hour to get my coat hung up (hundreds of people, one person on coat check), then for 15 minutes for food, then took one look at the scrum round the bar, went and got my coat back in rather less than half an hour, and went home. But I'm off out with a bunch of folk from Games for pizza tonight and that should be much more enjoyable.

We haven't exactly planned Christmas food either - we've got all the big bits ordered, but some of it might be decided on as the mood takes us. No-one's coming to ours this year, so we can please ourselves. Are you having people over, or heading out for Christmas? I shall try to get photos for you of the kitties enjoying their turkey.

And I've ordered some new clothes, but not what you might expect. A couple of salwar kameezes for my trip to India in 2018. I'll probably take mostly western things as the bulk of our time will be spent in Kolkata and Mumbai, but I thought I should pack a couple of more modest items for our time in Aurangabad. The 'straight suit' style isn't that different from a dress over trousers. I probably won't take much vintage to India (because it seems a bit rude given the country didn't get independence till the late 1940s, and I don't want people to think I'm the sort of pro-colonial idiot who goes around trumpeting about railways) though some of my blingier midcentury brooches might go in the bag. I guess repeat visits to the chazzas are in order. But first, Christmas!

Have a great holiday!


*I know the trains are always borked, but this is advance-notice borked as opposed to borked through sheer incompetence.
Labels: Bath film robot data