Um, yeah, it's the 29th, so I've left this a bit late. But I have been checking in on everyone's blogs and Instagrams, time permitting. It looks like everyone's been having a good time, which is nice.

Just before Christmas - we drove up on the 23rd, came back on the 24th - we went to Norfolk to see my mum and Brian. My godparents were there, and my brother, his girlfriend and my nephew Harry. Harry's one now, which coincidentally is the sum total of his vocabulary. All he can say is 'cat!' As Mr Robot isn't fond of children, Harry immediately latched onto him, and spent the next few hours repeatedly shouting 'cat!' at him and handing him oranges. Every time the oranges went back in the bowl, Harry would return them to Mr Robot. It was a fun time, and I was glad to see my mum after she nearly died of pneumonia earlier this year.

We had a quiet Christmas, just the two of us with no visitors. We haven't even eaten as much as we usually do. We had a slap up Christmas dinner - prawn cocktail followed by turkey with all the trimmings - but really couldn't face pudding so just nibbled at the cheese board. The cats had a little plate of turkey each, but as you can see Pippin also fancied a bit of cheese. (She didn't get any. Later on we heard a clattering from the kitchen and discovered her trying to take the tinfoil off the rest of the turkey, the little git. Ziggy, as always, was a Good Boy.)
I wore my Lindy Bop witch doctor dress, which isn't exactly seasonal, but it's comfy and rather smarter than everything else I've dossed around in. It's been repro 1930s beach pyjamas for the past couple of days. I've had a stinker of a cold, that's my excuse for being a slob. And a new PS4 game and a slew of old films I want to watch. I'm glad I got the cold before going back to Norfolk; there's no way I'd want to pass it on to Mum. 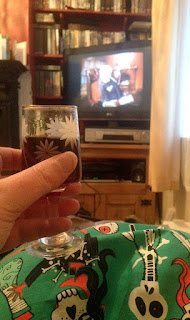 In case you're wondering about presents, very little was vintage, though Mr Robot did treat me to a bottle of Caron Narcisse Noir parfum, and my brother got me some Universal monster movies on DVD. Mr Robot also got me a beautiful eel leather handbag - modern, but in the boxy shape I love - and an emerald necklace, so I was very spoiled. Because I like the 1950s song 'I Want a Hippopotamus for Christmas' he gave me a box of Kinder Happy Hippo biscuits, and I got Freddos (chocolate frogs) and a bag of jelly snakes from the cats to make up for the real frogs and slow worms they've been bringing us all year.

It's nice having the time to spend at home. I don't really want to go out at the mo - can anything be more hellish than the sales? My office doesn't reopen till the 2nd, but the Mr has to work between Christmas and New Year and says Bath is heaving. He got himself a very nice checked suit, so I suppose the sales have some merit, but I'm still not getting on a train to fight my way through crowds. It's not like there's anything I need anyhow, not as much as a good rest. Have you been out to the sales, relaxing at home, or have you had to go back to work already? Whichever it is, I hope this period has still been a pleasant one full of good cheer for you!
Labels: Christmas