The Incredible World of Spy-Fi [books] 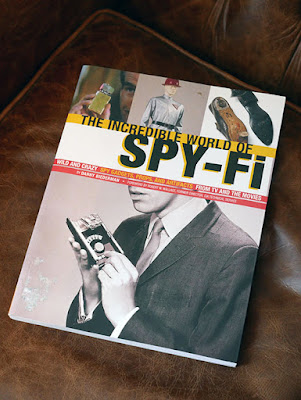 How do you feel about spy gadgets? I have a love-hate relationship with them, because when they're put in a TV programme or film and used well, they really enhance the action, but some of the later Bond films - the Pierce Brosnan ones, especially - feel as though the makers picked a few double-entendre names, a selection of locations, and some really silly gadgets (invisible car, anyone?) and then tried to cobble a story around them somehow.

Danny Biederman, on the other hand, is a man who really likes his fictional spy gadgets, because everything in this book is in his personal collection, which he was invited to put in a private exhibition for the CIA. The actual CIA.

I have to say, I envy Biederman his foresight. I can't remember exactly what I was into when I was about middle-school age, but I'm sure I don't still collect it. Biederman got bitten by the spy-fi bug as a child in the 1960s, when the real-world cold war and space race, and fictional James Bond, Mission Impossible et al saw a huge explosion of interest in the genre, collected things, and simply kept on collecting. As he grew up, his collection became more ambitious, so he's got Blofeld's actual desk from From Russia With Love. That desk hadn't stayed in the hands of the film-makers, it belonged to the managing director of the Hertford Handbag Company, but he tracked it down. The tarantula from Dr No spent time decorating a nightclub before Biederman had it. Ilya Kuryakin's cigarette pack transmitter very nearly ended up in a bin; Biederman rescued it from a trashcart. 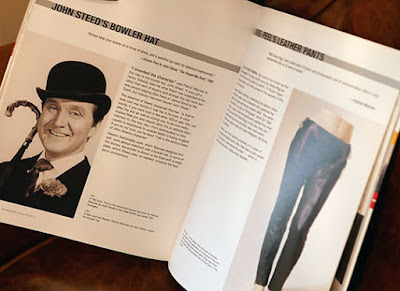 The story of the fag-packet transmitter's rescue is typical of the stories in this book: a tale of passion for things a lot of other people simply didn't value at the time. Because Biederman started young, and is American, there's a clear skewing, Bond aside, towards American shows and films. Bond, The Man From Uncle and Mission Impossible are all household names still, but I found the extensive amount of Wild Wild West (TV show, not the Will Smith film) material surprising, not to mention Get Smart. There's next to nothing of The Avengers - though what he does have is iconic. Steed's bowler hat and Mrs Peel's leather trousers. Ay caramba. I wish there were more information on the latter, because Honor Blackman wore leather trousers for her action sequences, whereas Diana Rigg hated them and switched to crimplene, and I'd love to know how they can be certain that these are Mrs Peel's trousers, not Mrs Gale's. They had been in the possession of one of the show's directors, though, and I guess if you're going to keep a pair of leather trousers for decades, it'll be because you have fond memories of the lady who wore them...

I don't think I'd ever have bought this book. I picked it up from the trash pile when we had an office move/clear-out at the start of the year. It looks, on the surface, like fluff, and it is mostly fluff, but the fact that it's one person's collection, and he's included his reminiscences not just of how the items appeared on screen, but how he came into the possession of each one, gives the book extra depth and interest. I'm glad I rescued it from the trash - even if it's not a cigarette packet communicator.
Labels: 1960s 1970s books film spy television