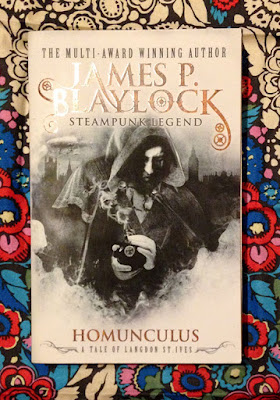 See the words 'steampunk legend' below the author's name? Usually I'd get annoyed by this sort of thing, but in this case it's justified. Unusually compared to other subcultures, such as punk or goth, steampunk has its roots in literature, and three men in particular: K W Jeter, Tim Powers, and James Blaylock. Since then, and since the mid-noughties in particular, the subculture has grown, and there's been a real explosion in the number of stories written within this genre. Possibly the most surprising thing about Homunculus is how many of the cliches of modern steampunk aren't present.


Set (mostly) in London in 1875, several storylines interweave. Inventor Langdon St Ives is waiting for toymaker and designer of intricate machinery, William Keeble, to create an 'oxygenator' for his spacecraft, and trying to track down a spacecraft rumoured to be in the possession of industrialist Kelso Drake. Drake is trying to force Keeble to hand over another device, a perpetual motion device. And Ignacio Narbondo, mad scientist, is raising the dead for Shiloh, an evangelist who's on the trail of yet another Keeble box because he believes it contains a tiny spaceman who is his father. Above them all sails an airship, powered by a Keeble device that is slowly running down, and soon to make its final landing in the British capital.

So, airships and spaceships and scientists. What doesn't it have? A tedious attention to dress (believe me, I have read enough bad steampunk to wish never to read another description of a bustle or corset again). Very few modern devices in Victorian garb - no steam-powered computers or clockwork mobile phones, though the story was first published in 1986, when mobiles were rare and impractical, which goes a long way to explaining the latter omission. There are no robots. It's refreshing to read a steampunk novel that feels like the setting is closer to the Victorian age than to the modern one with some cogs glued on. One that's more action than description.

Really, this is closer to a novel from the 1960s or 1970s than a modern one. It's a classic adventure story painted in psychedelic colours. It's somewhere between Michael Moorcock's anarchic fantasies and the film Those Magnificent Men In Their Flying Machines. That could be why I enjoyed it so much.
Labels: books steampunk