Beam Me Back, Scotty at the Museum of Brands 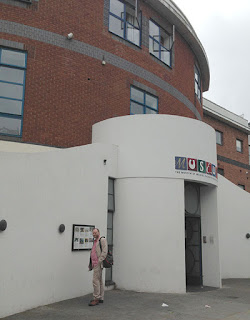 Yesterday Mr Robot and I went to London as our Twitter chum Emily was running her supperclub. She and her sister Amy cook Burmese food as The Rangoon Sisters, and we wanted to support them, and to enjoy some Burmese food we didn't have to cook ourselves. Because we got into London early with time to kill, I looked round to see if any interesting exhibitions were on, and discovered the Museum of Brands had one called 'Beam Me Back, Scotty'.

You might not have heard of the Museum of Brands. It's not one of the big national collections, it's the work of one man, Robert Opie. If you've an interest in old adverts, watch programmes like Back in Time for Dinner, or watch many other retro programmes, you'll have seen products from the Opie Collection. I suppose you could sum the collection up as 'things people buy'. Food in tins and packets. Toys. Cosmetics. And it's fascinating and lovely, because as nice as grand country houses are, for most of us, our history is on the shelves at the Museum of Brands.
At this point I will apologise for the lack of photos: they're not permitted. My guess is that's because so much of the material is printed, light damages printed things, and there are an awful lot of idiots out there who can't/won't learn how to turn their flash off, so it's easier just to ban images. You basically walk through a tunnel of floor-to-ceiling cases with black backs and glass fronts. You start with the Victorians, with magazines and sheet music, a whole case devoted to paraphernalia from The Great Exhibition, another with Victorian royal souvenirs, and so on. From there you pass through British consumer history, decade by decade, to the present. Mr Robot got very keen trying to spot when 'jig-saw' became 'jigsaw'.

'Beam Me Back, Scotty' wasn't a separate exhibition - instead there were cases of toys on a science fiction and space age theme along with each decade. There weren't many space-related toys early on, but when you got to the 1950s and 1960s it became really fascinating, with toy Sputniks and lunar landers, spy 'walkie-talkies' and pretend rayguns. As particular television shows became popular, toys from those creep in. Surprisingly, there weren't many Star Wars toys, but there were loads of Thunderbirds, and a good helping of Star Trek. A good smattering of early Doctor Who tat too.

When there were significant events – both world wars, royal weddings, jubilees - there were special cases of things showing the range of products available. Silver Jubilee fizzy strawberry drink, anyone? London Olympics cakes?

As we walked round I saw lots of things that made me think of people I know. 1930s dressmaking magazines made me think of Cate, and the dress in one 1970s case was pure Vix. I had fun checking out all the different perfumes; the shift from single-note lavender, rose and so on in the Victorian era to blended fragrances with Asian/Middle Eastern names in the Edwardian was particularly striking, and I only wish there had been more perfumes in the later cases. (Perhaps I should save my old bottles as I use them up and see if the museum wants them.) I loved seeing old copies of the Radio Times, and was amused to see they did special issues for Christmas even in the 1930s. Working in print, the trends in typefaces really struck me. And, of course, there was a huge helping of nostalgia once we got to things we could actually remember.

The museum's not cheap to get into – £9 each for adults – but I really enjoyed our visit.

After that, because I have a natural radar for good pubs, we ended up in the Elgin Arms, a Victorian gin palace with a grade-2 listed interior. It's pretty remarkable that so much has survived as it was a mod venue in the 1960s and punk one in the 1970s (Joe Strummer was a regular), and I'd have expected it to have been trashed. But no, lots of the original interior is still there, and it's beautiful. The beer was pretty good, too... 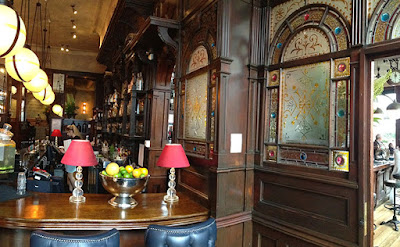