In which I fail at pub, but win at shopping

Yesterday Mr Robot and I decided to go on an Awfully Big Pubventure. Since our butcher closed its Trowbridge branch, we've been driving over to Devizes most Saturdays. Devizes is home to Wadworth's brewery, and there are some really nice looking pubs there. Instead of driving, yesterday we got the bus, with the aim of also sampling a few beers.

The bus took longer to arrive than expected, so I popped into the charity shop opposite the stop. What do you know? Not only did I find a modern summer dress I liked (for a fiver, it'll stop me fretting about being fed up of all my clothes), I also took a rummage through the scarf display. I don't wear scarves much, but I've been wondering if that's because I haven't found the right sort. Anyway, I found a lovely silk one, 1960s St Michael label, in colours that will go with lots of other things I own. If that's not a message from the vintage gods, I don't know what is. It's got a navy and red border around a neutral printed prince-of-wales check (I think Americans call it glen plaid).

So, hit Devizes, went to the butcher, then popped into our first pub. The Three Crowns is seventeenth century, but the interior was pretty modern - it felt like an upmarket cafe or bistro more than a pub. Nice enough, and the beer garden in the old coach yard was nice, but not really us. From there we went to the White Bear, the oldest pub in Devizes, and that was lovely. Wadworth does a beer called 6X which is usually pretty reliable, but the White Bear does the BEST 6X I have ever had. It was lovely inside, all wood panelling, and smelling of smoke from the wood burner. We were a little reluctant to leave, but as we were on a pubventure felt obliged to. 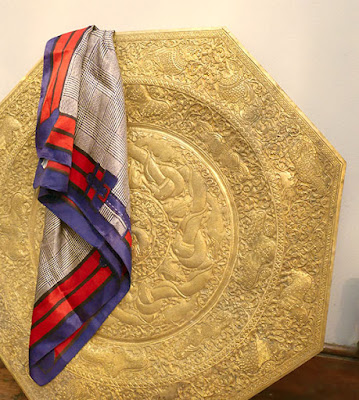 On the way to pub number three we saw an antiques shop, and dropped in. Most of it was lovely furniture, far too grand for our house. I spotted an Asian-looking brass thing leaning against the wall. Octagonal, and about two feet wide.  The chap said he thought it was 19th century European. I liked it, and Mr Robot bought it for me simply for that reason. We lugged it round two more pubs, neither of which we liked so I won't name them, then got the last bus back to Trow. At 6:15. Honestly, what sort of town has its last bus out before 9?!

I've had a chance to look at my big brass octagon some more, and I'm pretty sure it's the top of a folding tray table - lord knows what happened to its legs, maybe I should check to see if the antique shop has them! - and I suspect it's actually Sri Lankan or Indian. You see a lot of Moroccan tray tables, but they're usually round, engraved rather than repousse, and geometric because representations of living things are forbidden in Islamic art. Mine's plastered with animals, and the lions have the look of ones you see in Indian art. It's a mystery, really. We're planning to hang it on the wall at the bottom of the stairs, but I might dig out some woodwork tools and have a go at making legs for it. I won't be able to make a proper folding set, but I can manage a dismantlable set of four or eight. 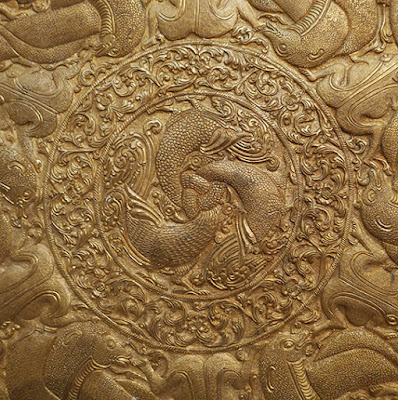