A lovely parcel from Miss Magpie 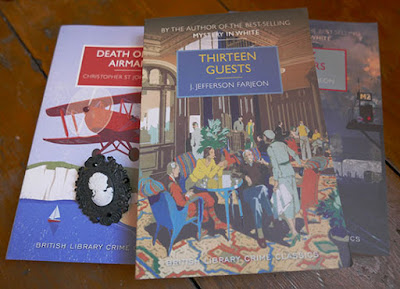 Earlier this week I got a parcel note put through my door. Something was at the Post Office, waiting for me to sign for it. "How odd," I thought, "I'm sure I haven't bought anything." (I did buy a pair of cherry red patent loafers while on deadline, but they were delivered to Mr Robot's office, and turned out to be too narrow so they've already been returned.)

Yesterday I picked the parcel up, and it was a box of goodies from Gisela, who blogs over at Miss Magpie's Musings. She'd mentioned having some of the British Library republished vintage crime novels, and as she wouldn't read them again, said she'd pass them on to me. I'd completely forgotten, so it was a lovely surprise. Two - The Z Murders and Thirteen Guests - are by J Jefferson Farjeon. I wasn't so keen on Farjeon's Mystery In White, so it'll be interesting to see if these are better. 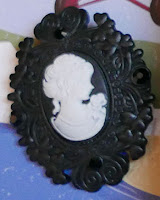 I haven't read anything at all by the magnificently-named Christopher St John Sprigg. The blurb on the back of Death Of An Airman notes that he died fighting for the Republican side in the Spanish Civil War shortly before his 30th birthday, so he clearly did well to have seven novels published before then, and who knows what he might have achieved if he hadn't been killed in action.

Gisela also included a tablecloth with an embroidery design printed on (I found my cloth I started embroidering when I was tidying up my gubbins trunk today, and it make me think I really do need to do a bit more embroidery at some point) and this lovely black iron cameo brooch.

So thank you, Gisela, for the super parcel! It really made my day.
Labels: 1930s accessories books craft embroidery