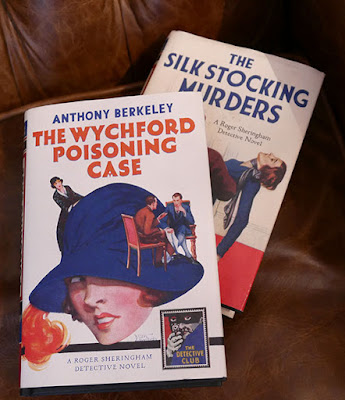 Ooooh, so close to recommended, these ones! Usually when I read old crime novels that have been republished, I find myself sort-of enjoying it, but also realising why the novel had lapsed out of print. The ones that stay in print – Agatha Christie, Dorothy L Sayers, Raymond Chandler – are all first-rate, and the ones that have lapsed are not quite the same standard. These two by Anthony Berkeley are actually really good murder mysteries, but with problems that make them hard to recommend to modern readers. As is so often the case, it's our old acquaintance, Attitudes Of Their Time, causing the trouble.
The Wychford Poisoning Case was originally published in 1926, and The Silk Stocking Murders two years later. In the former, novellist Roger Sheringham is in Kent, investigating a case where a young wife who'd been having an affair is accused of killing her husband with arsenic; in the second he gets drawn into looking into the apparent suicide of a showgirl. Unlike a lot of detectives of the period, Sheringham is keen to explore the who in order to find out the whodunnit, rather than the what or how. That's especially true in the second book, where hard clues are almost nonexistent. In both novels he gets to know everyone involved in order to solve the crime.

Wychford was based on a real-life case, that of Florence Maybrick. Sheringham's friend Alec has relatives in the town, who they go to stay with, and Alec's 19-year-old cousin Sheila helps the pair. The problematic Attitude in this book is sexism – the blurb on the dustjacket says the reason the book wasn't republished for over 80 years was 'inappropriate sexism and scenes of spanking'. The spanking is particularly bizarre; Sheila is a feisty thing, which her older cousin takes as an excuse to flip her over the sofa and smack her bottom, ripping her evening dress in the process. I'm honestly not sure in what universe this would be appropriate, but clearly 1920s audiences didn't think it was fitting.

Sheringham's also prone to pontificating on women, their 'little heads' (he's very fond of applying the adjective 'little' to anything feminine) and lack of sense. It's all very odd, because the women in the novel seem a mixed, but not all awful, bunch, so Berkeley was capable of writing nice women, even if he wasn't good at being nice about them.

You could say something similar about the second novel, though in this case the actual physical violence is on the part of the killer, not one of Sheringham's friends. I actually have more of a problem with Stocking, not for sexism, but for antisemitism. The one Jewish character is generally described in favourable terms, but Jewish people from Eastern Europe are definitely not. What's more, there's no reason for the Jewish character to be Jewish; nothing hinges on the Sabbath or particular food stuffs or Hebrew writing... all I can think is that Berkeley was playing on the antisemitism that, sadly, was not unknown in Britain in the 1920s and 1930s and using it to influence the reader to feel a certain way about the character. I don't like authors expecting me to be racist!

It's a shame because Stocking is otherwise a really good book, and an unusual one. The murders aren't genteel, or even for gain, they're serial killings, acts of madness, and something that didn't get explored much in British crime fiction for decades to come. The way high society and the rackety side of the theatre interacted in the 1920s is engagingly depicted, too.

Attitude Warning aside, there's another reason why I would hesitate to recommend these: the endings feel a bit cheaty. With someone like Freeman Wills Croft or Agatha Christie, you get all the clues to the solution within the text; you can play along. The endings here come as a bit of a surprise. It's one thing to identify a culprit incorrectly, another not to have the information necessary to identify them at all. So, dodgy politics and unsatisfying endings – no stamp of approval from me for these.